Work has begun on the 6-storey Canadian Westinghouse Building at the southeast corner of King Street and Blue Jays Way, crews have begun the delicate task of disassembling the building's south and east facades. The Westinghouse building's other two facades will be incorporated into the podium of Greenland Group's King Blue, but these particular walls will disappear into the new development.


The heritage north and west facades will be preserved in-situ—a task to be overseen by heritage specialists ERA Architects—becoming a distinctive element in the Page + Steele / IBI Group Architects-designed development which will include 48 and 44-storey towers in two of the corners.

Using work platforms installed along the south and east facades in November, workers are in the process of peeling away the outermost layer of bricks on the heritage structure, revealing the underlying brick and steel structural elements of the building for the first time since it was constructed in 1927. 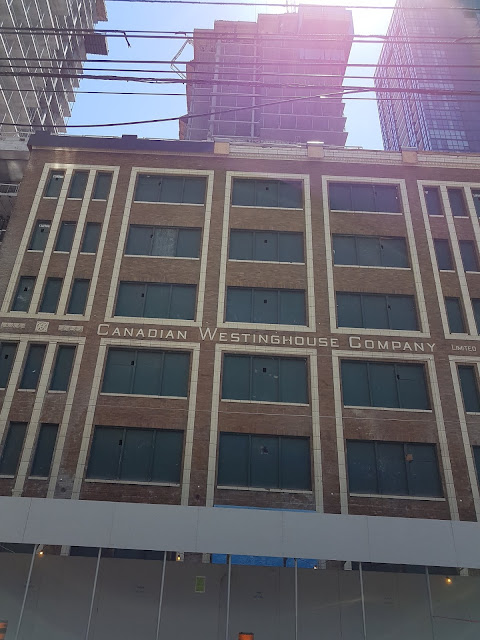 The Westinghouse Building’s rich history began in 1927 when a three-storey structure, designed by architect Bernard H. Prack was built as the district sales office for the Pennsylvania-based Westinghouse Company to support its factory in Hamilton, Ontario factory, opened in 1897 as the first company factory outside of the United States. The company continued to flourish with the office in Toronto, and three more floors were added to the building in 1934/35 for the company’s sales and service departments by the Prack+Prack firm, which Bernard founded with his brothers Arthur and Frederick. This now six-storey building, with the terracotta frames that articulate the brick façade, became a significant part of the Westinghouse company’s history, which had its humble beginning in 1886 when George Westinghouse founded the Westinghouse Electric Company, and with whom the Pracks worked for many years. It’s no wonder that the buildings in this block have earned their designation under the Ontario Heritage Act for meeting the municipal criteria under the three categories of design, associative and contextual values. One of the Westinghouse building’s features is its classical detailing highlighted by the rare application of terracotta trim on its brick surface. The structure was also home to the much-loved Indian Motorcycle Café and Lounge, one of many destinations in the Entertainment District.

I can't find an earlier photo. 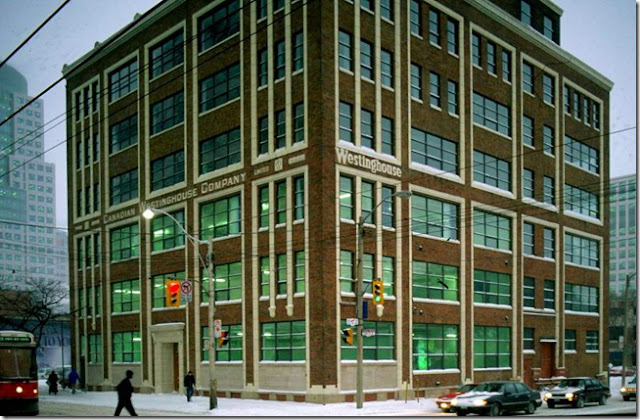