Tom the backroads traveller hosts this weekly meme.
Travel Tuesday
Our World Tuesday
Image-in-ing
My Corner of the World
Timeless Thursdays is hosted by Stevenson Que
January 2021 - Toronto ON
Originally used in Victorian times as passages to deliver coal and groceries, Toronto lanes continued to be built into the 1930s.
It costs $300 to put a single sign on a pre-existing pole; $400 if a pole is needed.
Doctor O Lane (located south of Carlton Street, between Parliament Street and Central Hospital Lane) – named after Dr. Oronhyatekha (“Burning Sky”) M.D., who was born into the Mohawk tribe and baptized as Peter Martin. Oronhyatekha graduated from the University of Toronto’s medical school in 1866 and is thought to be the first native doctor in Canada to train and practice in western medicine. Dr. O, as he was known, resided at 211 Carlton Street.
Dr. O Lane 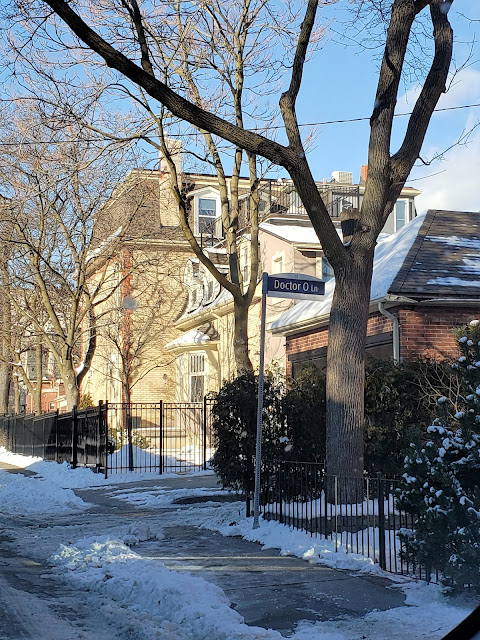 Click here to see a mural of Dr. O's life. 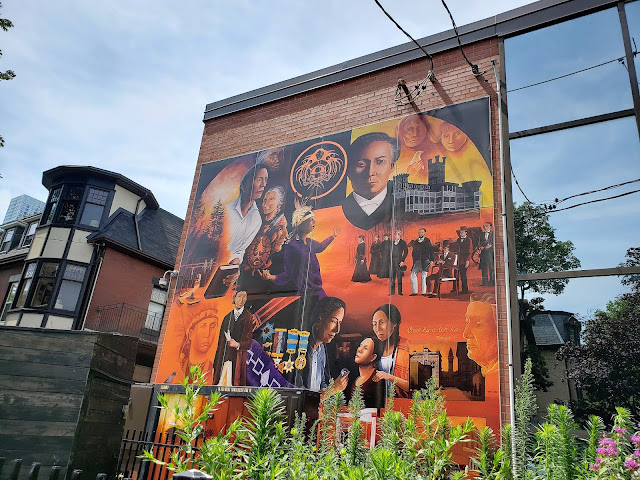 Central Hospital Lane
Cabbagetown was quite a hub of medical activity in years gone by. A nursing school as well as 3 medical schools, including one dedicated to teaching medicine to women (which later developed into Women’s College Hospital) were located in the neighbourhood. The central hub for these locations however, was the Toronto General Hospital which stood in Cabbagetown from 1856 to 1913.
The hospital grounds were south of Spruce St., west of Sumach St., north of Gerrard St. East and east of Sackville St. The hospital had 250 beds and was considered very modern for its time. In 1913, the hospital ceased operating at this location and moved to its College St. location.

At the other end of Central Hospital Lane is Oskenonton Lane. It is not in the usual blue font on other lanes. Perhaps because it was the first lane named? 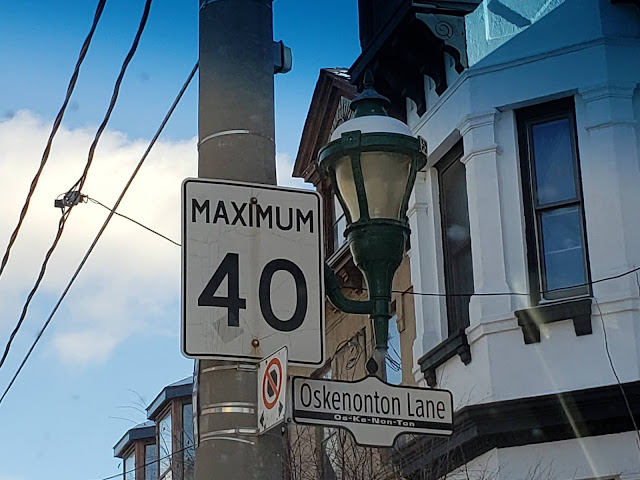 Oskenonton Laneway was the first laneway to be named in Cabbagetown South. Here is the fascinating story of the person after whom this laneway was named. “Os-ke-non-ton (also known by his Anglo name Running Deer) was born into the Bear Clan at the Kahnawake Reserve outside of Montreal in 1886. His Mohawk parents were musicians. His grandmother was a Medicine Woman. Before reaching adolescence, Os-ke-non-ton was orphaned. He lived with relatives before being moved into a residential school. On several occasions, he escaped to live alone in the woods. By the time he reached his early 20s, he acted as a hunter and guide for tourists visiting the Canadian wilds. Due to racism and the segregation born of it, Os-ke-non-ton was forced to keep his personal quarters a considerable distance from tourists. One evening, he sang songs from his childhood by his campfire with his bass baritone voice carrying a great distance across the water of a lake. Hearing it, two women (one a musician and vocalist) visiting the area from Toronto, took to a canoe and launched it paddling in the darkness as they traced the voice to its source. Their meeting with Os-ke-non-ton led to his living in Toronto where he received formal training vocal training for opera. In time, he performed and was welcomed into the social circles of Joseph Atkinson, Andrew Carnegie and Albert Einstein. Os-ke-non-ton also became a friend of Thomas Edison. (This is the same Thomas Edison who purchased the patent for the electric light bulb from Woodward and Evans. Woodward and Evans work is now commemorated in Cabbagetown by the naming of a laneway after them. Their laneway is aptly called “Woodward Evans Lane” and it is located North of Gerrard St.).
In 1915, he was asked to sing at the Christmas tree lighting ceremony at Madison Square Gardens. Returning to Toronto, he performed at many venues including Massey Hall and the Canadian National Exhibition. He also traveled overseas for several performances at The Royal Albert Hall and before European Royal families. Os-ke-non-ton passed out cardigans to the poor in Cabbagetown at the holidays, provided foster care to at least two children, spoke about First Nation culture in Toronto Public Schools and worked with fellow Chieftains and Toronto mayors for civil rights and to bring an end to discrimination. Once asked about his love of music, he referenced his early exposure to traditional Native songs and recorded Christmas carols. Judging from the 78 rpm records of his performances he also had a fondness for Native Hawaiian music”.
Os-ke-non-ton died in the mid-1950s and a memorial was held at Massey Hall.
Drovers Lane named for the residents who drove livestock to market. 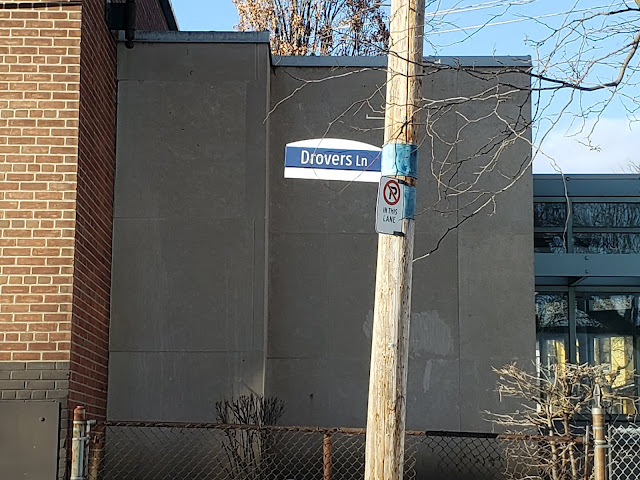 Magic Lane is named Doug Henning, a Toronto-trained illusionist who was an 8-time Emmy award nominee and winner for NBC's Doug Henning's World of Magic program. Henning also had top-billing on several Broadway musicals, including The Magic Show and Merlin. 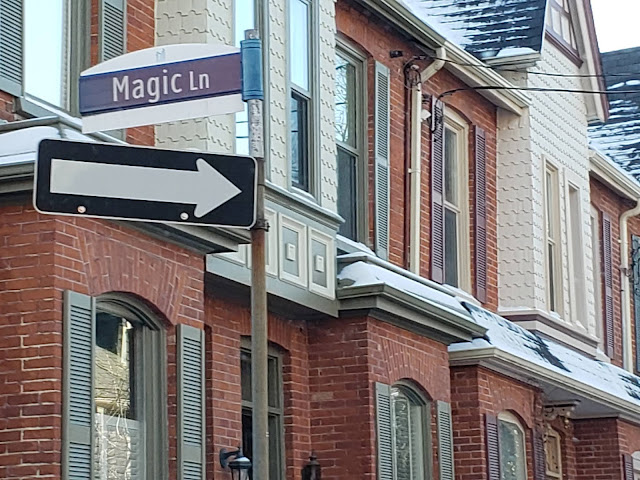