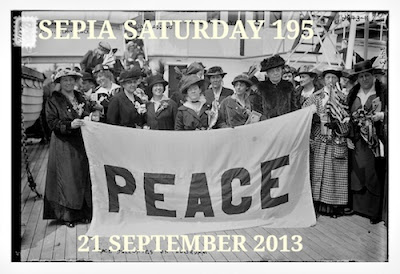 195. Today will be International Day of Peace. Sepians can do their bit by highlighting it in their blogs. Activities around the world will include; ceremonies, prayers, choirs, tree planting, art exhibitions, lighting candles, peace walks. Your response could be one of these from the past, historical or personal.

It amazes me what I learn from doing these challenges at Sepia Saturday.

This photo of Kay MacPherson was taken by  photographer Pamela Harris.

TORONTO (CP) -- In the mid-1960s when many Canadian women were at home making tuna casseroles and waxing the kitchen floor, Kay MacPherson was languishing in a French jail.   She, along with a dozen other peace demonstrators, had tried to present a statement to the secretary general of NATO during a 1964 conference in Paris.   They were protesting a proposal for a multilateral force that would allow any NATO naval commander to press the nuclear button whenever he deemed necessary. For their trouble, they were locked up.     When the slim, indomitable white-haired activist received her Order of Canada from Gov. Gen Ed Schreyer in 1982, he asked her, "and what have you been up to lately?"  "Revolution," she replied. And she wasn't joking.

MacPherson served humanitarian causes and social concerns, particularly women's rights, most of her life.  She also helped establish Women for Political Action, and in 1977 was elected president of the National Action Committee on the Status of Women.

Born in England in 1913, she trained as a physiotherapist before immigrating to Canada in 1935.  After working in Montreal and then Fredericton, N.B., she married political philosopher Brough MacPherson in 1944.   She ran for federal office under the Feminist Party banner, and in 1973 she joined the NDP and tried three times -- all unsuccessfully -- to get a seat in the House of Commons.

It reads:
In my work for peace during the last twenty-five years, I’ve been called a peacenik, a dupe, a dangerous radical, an impractical idealist, a subversive and lots of other things. In 1964 I was one of a group of women arrested in Paris while peacefully trying to deliver a letter to the Secretary of NATO opposing their plans for a multilateral nuclear force. In 1982, en route to New York to attend a women’s conference and the International Peace Rally, I was dumped off the bus by U.S. border officials as an undesirable visitor. Eventually all the press and protests forced the authorities to relent, and I was allowed in. That gave me a chance to be part of the June twelfth rally, where I had the experience of a lifetime speaking for Canada to a million people in Central Park.I am convinced that co-operation, non-violence and equal rights must form the base for future society. We have to move away from threats, “deterrence,” violence and war if we are to survive. I believe that a key element will be the participation of women in the decisions that affect us all. For example, the methods women use to prevent children from fighting with each other or to divide up the toys and food could be transferable to a wider arena. Using our own experience, women must work to find new ways of stopping the world’s drive to self-destruction and of creating a peaceful and constructive international community.