We headed to Thornbury today with no particular plans. We thought we would spend a few hours in the Village of Blue Mountains but we drove around it and nothing appealed to us.

The Township of Thornbury was incorporated on April 23, 1833. The source of its name is somewhat controversial. Some historians claim it was inspired by the wild thorn berries that grew along the Georgian Bay shoreline. Others deduce that the settlement was named after three Thornburys from England.

In 1855, the town’s first business, a milling operation was set up. By 1857, the population had reached the 100-person mark. Back then a walk through town would have taken you past a general store, blacksmith, cooper and fanning mill shops, grist and saw mills and a post office.
The apple packing industry took root in Thornbury in the 1880s. In 1905 the Georgian Bay Fruit Growers Association was formed. 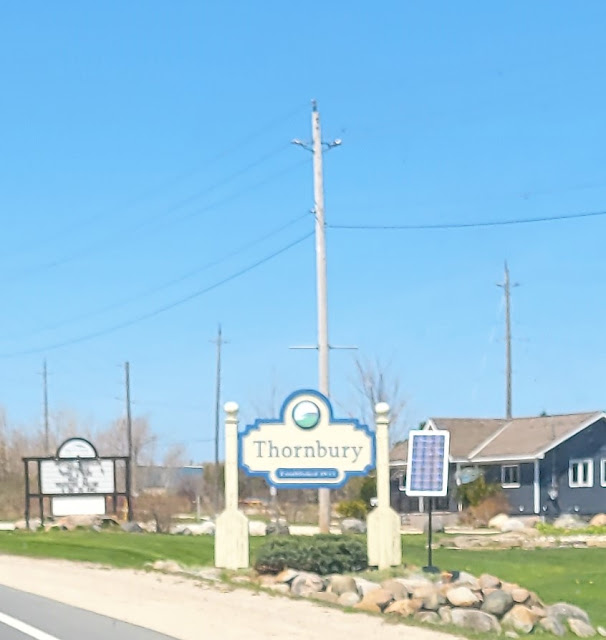 Thornbury’s recently renovated cider house dates back over a century when it was owned by the Mitchell family of apple growers. Although the building was burnt down in the 1920s, it was rebuilt with thick, insulating cork walls to keep the apples naturally cool in storage. The location was ideal as the Georgian train track came right to its doors to load up apples that were brought to Toronto for shipping to the UK.


The building’s uses were many for the community over time, including as a bomb shelter during the cold war, and subsequently as a town market. In 2007, the building was purchased to house the Thornbury Village Cidery but it was not until 2017 that it was able to open as a visitor center.

The cidery purchases its apples from Golden Town Apple Products in the scenic Blue Mountains region along the shores of the Georgian Bay. The area is home to one of the largest concentrations of apple orchards in the country with over 7,500 acres planted which are growing and expanding.
We had lunch here, you'll have to check out the weekly recap for that.

A walk in town.

We then took a drive with nowhere in mind!

Posted by Jackie McGuinness at 6:54 PM