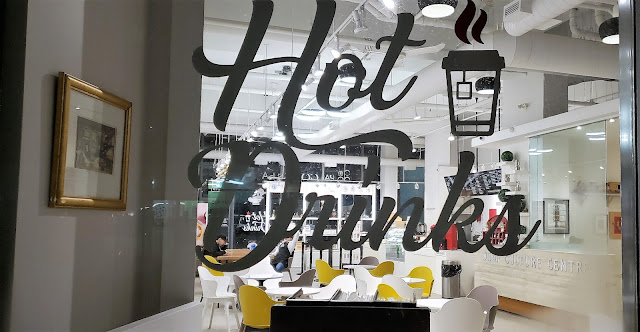 Distillery District Toronto ON
Click here for FEEL GOOD baseball and STUPID (warning strong language) stories of the week.
Click here for another FEEL GOOD CANADIAN JEOPARDY story.
Saturday we went for breakfast at the George Street Diner. John had mentioned recently he wanted an Irish breakfast so this is the obvious place as an Irish woman runs it. I placed an online order on Friday so it would be available for pickup as well.
We have eaten here a couple of times during the pandemic, sitting outside.
October 2020
November 2020
We were surprised but very pleased when we walked in and were greeted with "we are still checking vaccine passports" no problem!!! Only one man walked in and was annoyed and left with the phrase "well, you won't get my custom!".

John had the Ultimate Irish and I had the Irish with mushrooms. Note to self, we don't like their mushrooms!

GPS heading home, the diner is in the middle of the screen.

Irish pub, streets are quiet as it is only 10:30 on a Saturday morning.

To see these murals in all their splendour, click here. 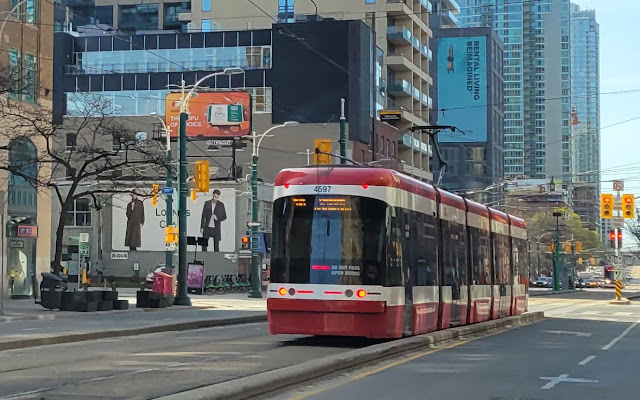 Lake Shore, check out the geese traffic sign. The mural on the bridge is by Chicago-based artist Justus Roe.

My order from the George St. Diner along with eggs.

John met his old physio for lunch and then an acupuncture treatment.

The Toronto Marathon was run on Sunday which closed down some streets around us. We weren't going anywhere anyway.
I put together some sightseeing activities for next week. We booked a week of timeshare north of us and will spend time exploring the region around Georgian Bay.
I made jars of taco spice mix and BBQ chicken mix for quick dinner prep. I also took inventory of my spice drawer for my next trip to the bulk store. I would have made up a curry mix but was low on garam masala.
Monday John had a 10:15 for his 4th covid shot downtown. No effects. He also managed to get another box of rapid allergen tests (RAT), these are free but hard to find. I also scored one on Tuesday when I was out.
I baked gluten free coconut and pineapple loaf, this recipe didn't tell you when you add the coconut or lemon zest. The baking time at the top of the recipe is 45 minutes and further down it says 55 minutes. I added another 20 minutes to get it done. It was delicious.
Tuesday I went downtown to The Bay to shop and came away with nothing. Picked up sushi for lunch.
And it's that time of year again, hockey fever! 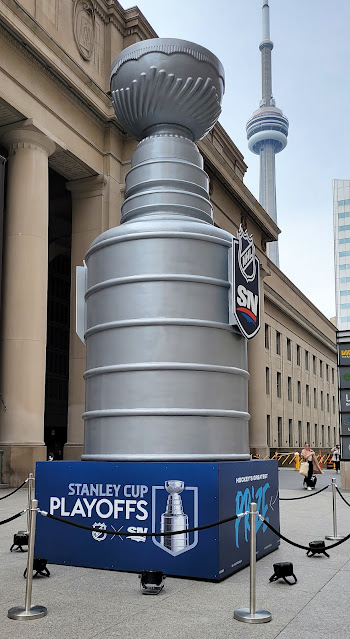 The annual garage cleaning is taking place this week in the condo which means you have to move your car on Wednesday for our floor. We were lucky that the parking attendant is friendly with John and called on Tuesday to say he had a visitor parking spot blocked off for us, so John went down and moved ours, the attendant was tipped with pleasure. Otherwise you have to hope you can find a spot (a lot of visitor parking is currently blocked off due to construction) or else find a spot on the street (no street parking allowed) or in the very small public lot near us.
I ordered some new embroidery kits. I want one to take away with us.
Wednesday was a rainy miserable morning. It should have been John's first golf game of the season but he is still doing physio and not wanting to take a chance.
We filled out the online application for June's Elections Ontario vote, we NEED to vote out Doug Ford. 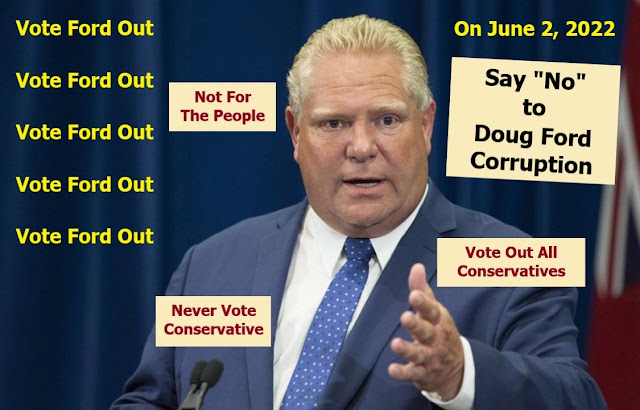 Thursday we sat around waiting for the plumber, yes, my new best friend, Raffi. There is a leaking pipe in the bathroom.
Started organizing stuff for our week away. We will have a full kitchen so we will be bringing stuff from home for breakfasts and some meals. We do plan to enjoy some meals out, mainly lunches.
John went to the locker to get a suitcase and the large cooler. He remembered he needed to move the car back to our spot. SURPRISE! It wouldn't start. Long story short, he brought the other keys down thinking the key battery wasn't working. Both sets didn't work. Came back to see how he updated keys. How about the battery? How about calling roadside assistance? Garage attendant tried to boost to no avail, John got new key batteries (thank you on site convenience store) but still wouldn't start. Called roadside assistance and they boosted and it started.
Oh yes, the plumber came, fixed the leak, it was coming from the stopper. Still waiting for our invoices for March and April work.
John went for acupuncture.
Friday was mainly getting groceries for next week, packing a variety of clothes, making reservations, laundry and creating itineraries.
Friday's sunset! 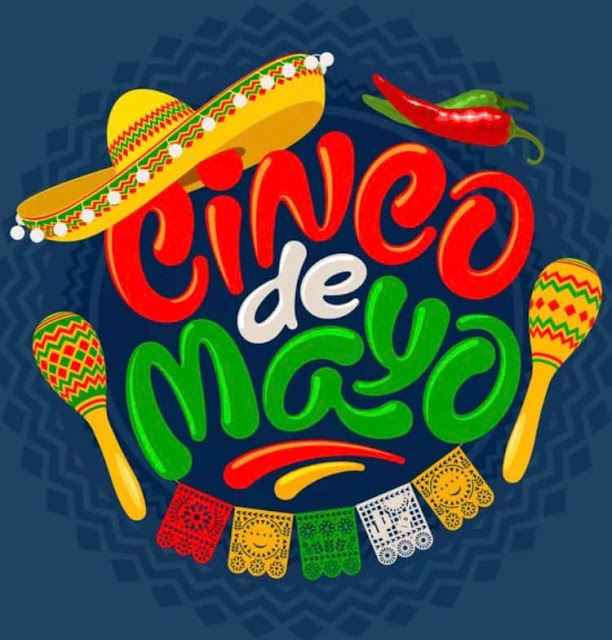 Friday steak and baked potatoes. I made a chimichurri with the remaining cilantro.
WATCHING
Watched the final season of Ozark, I will miss my girl crush, Julia Garner!
You must watch The New Corporation: THE UNFORTUNATELY NECESSARY SEQUEL, this article tells you why! Our prime minister Trudeau and Australia's Cameron also play a role in this documentary.
The sequel to The Corporation (2003) exposes how companies are desperately rebranding as socially responsible — and how that threatens democratic freedoms.
The filmmakers posed the question, If a corporation is like a human being, how would a psychiatrist choose to characterize that person? Well, let’s see: Since corporations are ruled by the profit motive, they’re almost by definition greedy, selfish, ruthless, and ultimately indifferent to the well-being of others. The conclusion the film came to is that the corporation, if you really look at it, has the profile of a psychopath.
I watched the documentary White Hot: The Rise and Fall of Abercrombie and Fitch, I knew nothing about the company and was horrified by their illegal hiring practices. This documentary explores A&F’s pop culture reign in the late ’90s and early 2000s and how it thrived on exclusion.
I watched season one of Canadian Wall of Bakers. I didn't really know any of these Canadian baker chefs. Click here to see the chefs, I am NOT a fan of Ricardo!
Click here to meet the contestants.
I watched the first 7 episodes of Julia on HBO Max. It is inspired by Julia Child's extraordinary life and long running TV series. I love seeing the history of television from the 60s up to now.
This week's episode of The Resident was very interesting as a transplant patient was denied an organ because he was not vaccinated.
READING
I finished A Town Called Solace, longlisted for the 2021 Booker Award. It is set here in Ontario in 1972. There are three main characters telling their story at different stages in their lives, 8 years old girl, 35 years old man and an elderly woman.
I started The School for Good Mothers, a dystopian look at the government's far reach into child welfare and social services. Think Handmaid's Tale. Very sad state of affairs, this book is troubling in much the same way as the Roe vs Wade is. I am sure the rules at The School are made by men.
Posted by Jackie McGuinness at 5:22 PM