Tom the backroads traveller hosts this weekly meme.
Travel Tuesday
Our World Tuesday
Image-in-ing
My Corner of the World
Postcards
Toronto ON
Click here for a history of Toronto lane naming and a list of other lanes. That post is a work in progress, and gets updated frequently. Planned by Waterfront Toronto and designed by The Planning Partnership, Trolley Crescent was the first woonerf introduced in Toronto in 2014. This U-shaped street is located in the West Don Lands and runs east from St. Lawrence Street, past River Street then south along the eastern edge of River City, then turns west running parallel to Underpass Park back to St. Lawrence Street.

Never heard of a woonerf before? It’s a relatively new street concept in Toronto that has experienced great success in Europe. This innovative approach to street design places equal priority on pedestrians, cyclists and vehicles. “Woonerf” is a Dutch word that roughly translates to “living street”. While cars are intended to use the street, the specially designed paving—with no curbs or defined sidewalks—encourages vehicles to slow down and consider the other uses of the space. Essentially, woonerfs are designed to prioritize pedestrians. 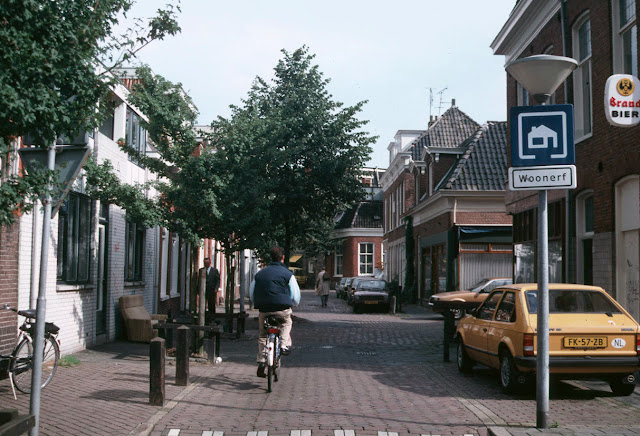 A Dutch woonerf, image by Erauch, via Wikimedia Commons
What a novel concept in Toronto where cars rule!! I doubt this would make any difference to the selfish drivers.
Posted by Jackie McGuinness at 12:30 AM