This has been on my bucket list since it opened in July. I bought tickets for the 3 PM slot on Thursday.

A warning up front, this is a photo heavy post and I had to control myself to 10 13 16 photos per exhibit! I also made the Golden Horseshoe a separate exhibit. 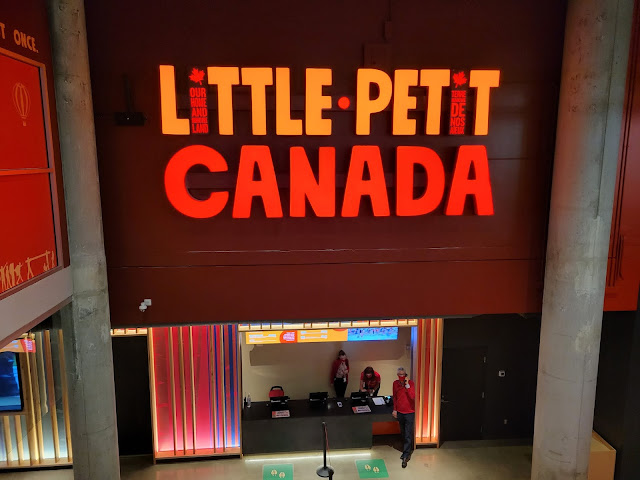 Little Canada is a highly detailed and immersive miniature attraction that offers spectacular scenery, enveloping soundscapes, animated features, and moving cars, trains, and boats that all operate on a 15-minute day cycle; upon sunset thousands of tiny lights illuminate the display. The four seasons are also represented.

Click here to learn the story behind the creation. We were immediately reminded of Madurodam in Holland.

Guests can visit five destinations including Little Niagara, Little Toronto, Little Golden Horseshoe, Little Ottawa and Petit Québec. A sixth destination, Little North, is under construction.
We start out in Niagara, covering the Falls, Niagara Falls, the wine region and the town of Niagara on the Lake.
We were like little kids, excitedly pointing out landmarks that we know. Click here for our last visit to the Falls and Niagara Falls.

Maid of the Mist

Rainbow Bridge border crossing to the US.

The sun is now rising.
On the way into Niagara Falls you can see the Floral Clock and statue of Brock.

Wine country, the winery of Inniskillen is on the right.
Click here to see some of the wineries we visited last summer.
That chapel in the middle is the smallest church in the world, Living Water Wayside Chapel!! Hey, we've driven by but never stopped, another one for the bucket list.

Away from the kitschy Niagara Falls and into the town of Niagara on the Lake (NOTL).

There is so much detail that you could spend hours checking everything out. Every little figure has a purpose.

The city of Toronto and the Golden Horseshoe.
It is night time when we first get to Toronto. Those two towers on the left are actually in Mississauga, there are known as Marilyn Monroe towers. 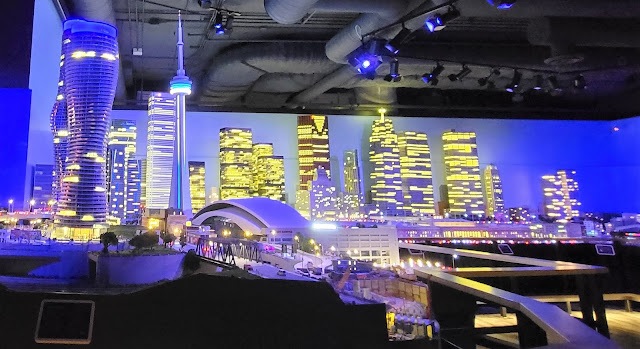 The Don Valley Parkway or as it is usually called Don Valley Parking Lot.
The bridge is the Prince Edward Viaduct or the Bloor Viaduct. It also has a subway level. 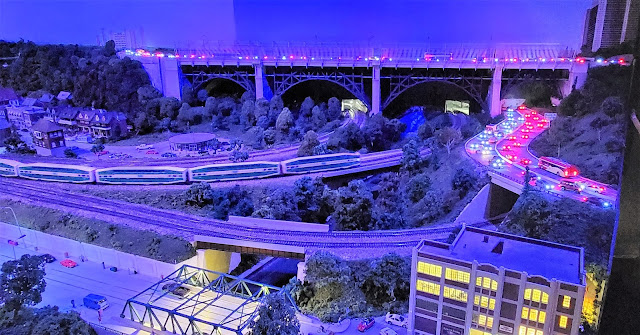 St. Lawrence Market with the Distillery District beside it.

Love this! I love that you can see the sculpture Search Light, Star Light, Spot Light in the front of the arena.

Here's a short video John filmed.
Union Station with the financial district behind.

Rogers Centre (originally and still affectionately The Skydome) at night.

With the roof closed.

Billboards along the Gardiner Expressway.

Waiting for the GO train at Exhibition Station below the Gardiner.

The Golden Horseshoe is the most densely populated area of Ontario. In the earliest days of Ontario, the area was dotted with small towns and villages that served the vast farmland throughout Southern Ontario. In the second half of the twentieth century, rapid population and economic growth around Toronto and affordable car transport led industry and residents to move further into the country; towns and farmland were developed into residential suburbs, shopping centres, and business parks, all connected by a new network of roads and highways.
Burlington

Founded in 1912, ArcelorMittal Dofasco is Canada's leading steel producer and a hallmark of advanced manufacturing in North America.

The Art Gallery of Hamilton - known to most as simply the AGH - is the region's oldest and largest public gallery.

The first Tim Horton's was in Hamilton.

The Wayne Gretzky Sports Centre is down in the left corner.

Also on my bucket list is the Brantford home where Alexander Graham Bell invented the telephone on July 26, 1874.

On the road to London ON.

Also on the bucket list.
Sir Frederick Banting lived in this London home, located on Adelaide Street near Queens Ave, in 1920 and 1921. It's in that home where he thought of the idea that led to the discovery of insulin.

Moving on to Stratford.

Before Covid put a stop to so many things we would always see some theatre in Stratford.

Pop over the my weekly recap to see the dancers in action!

OTTAWA ON the capital of Canada and the home of Parliament.

You can take a peek into the hotel rooms!

Ottawa is known for its spring tulip festival.

So far we have had summer, autumn and spring. Now to winter in Quebec. 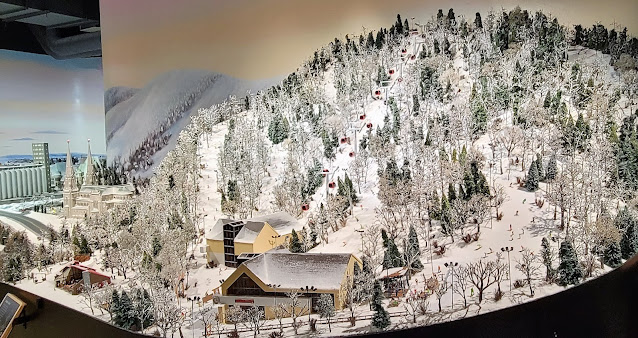 Pouring the maple syrup onto snow.

We would never have noticed the pickpocket if one of the guides hadn't pointed it out.

Waiting for the bus

Pushing the car up the hill.

Bonhomme is the official representative of the Québec Winter Carnival, white as snow, he wears a red tuque and arrow sash. 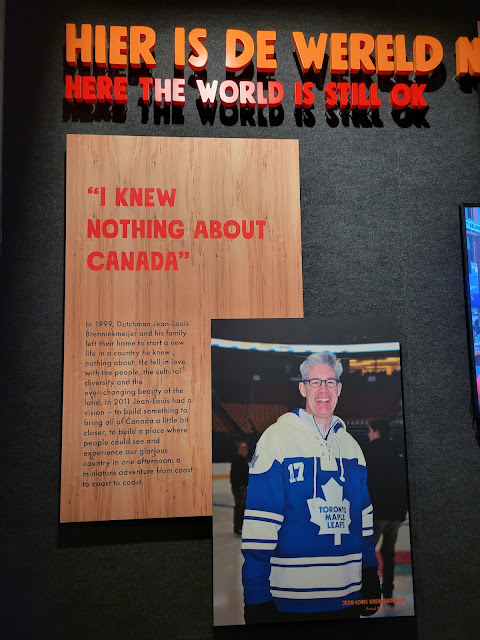 With the construction of Little North, guests will have the opportunity to get a behind-the-scenes look at how the Miniature Makers bring the little country to life.

Posted by Jackie McGuinness at 4:17 PM