The Famous 5 are five women, truly pioneers, who in Alberta in the early part of the 20th century shaped the future of the lives of all Canadian women to come. Because of their efforts, on October 18, 1929, the Privy Council declared in the famous " Person's Case of 1929" that women were persons and thus eligible to hold any appointed or elected office.
At the time of their victory, the media dubbed the group the "Alberta Five." Over time, as the case took on a privileged position in Canadian women's history, the group became popularly known as the "Famous 5." They have come to represent an entire generation's political activism, including an earlier, nationwide campaign for women's suffrage.

Each was a true leader in her own right: one a police magistrate, another a legal expert who founded the National Council for Women. Three served as Members of the Legislative Assembly of Alberta — among the first female elected officials in the entire British Empire. And they did all this before they were even fully defined as persons under Canadian and British law.

Separately, these five women were champions of the rights and welfare of women and children. They worked hard and courageously in the face of the prejudices and resistance of the day. Together, they formed an unstoppable force that changed the world for women in Canada and in all Commonwealth countries.
The Famous Five have been commemorated with individual and group plaques in the foyer and antechamber of Canada's Senate and two identical sculptures by Canadian artist Barbara Paterson. One at Parliament Hill in Ottawa, and the other at the Olympic Plaza in Calgary.
Yes, I'm wearing a cowboy hat, because it is the Calgary Stampede and everyone in town is wearing a hat. 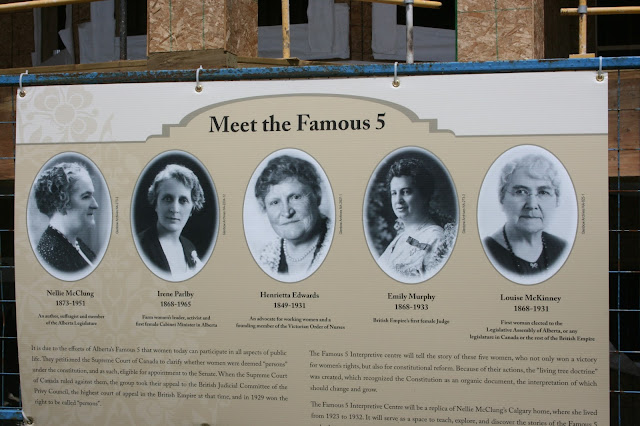