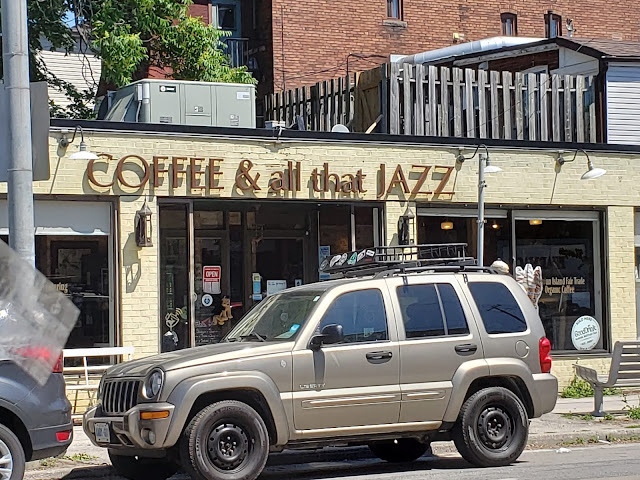 Roncesvalles Ave Toronto
Kiefer Sutherland - Bloor St. sings about his hometown, Toronto.
We spent the weekend in Montreal visiting family, the first time since the pandemic.  Lots of catching up and laughs, good food.
It was a rainy drive both ways.
We take the 401 highway so had a chance to photo the bridge.
The Pickering Pedestrian Bridge, which runs over Highway 401 in Pickering, Ont., is now the official record holder for longest enclosed pedestrian bridge in the world.

Monday raining again, but not complaining. John caught up on his football games. I cleaned the fridge and baked.
I'm not sure where the rest of the week went. We went out to lunch on Wednesday at Burger's Priest for burgers and fries and then made a stop at Homesense on the Queensway. I usually shop downtown and this store was a zoo, which I did not enjoy at all. But I did find some bath sheets for $15 each and another basket, but not big enough for my plant but it found a home. 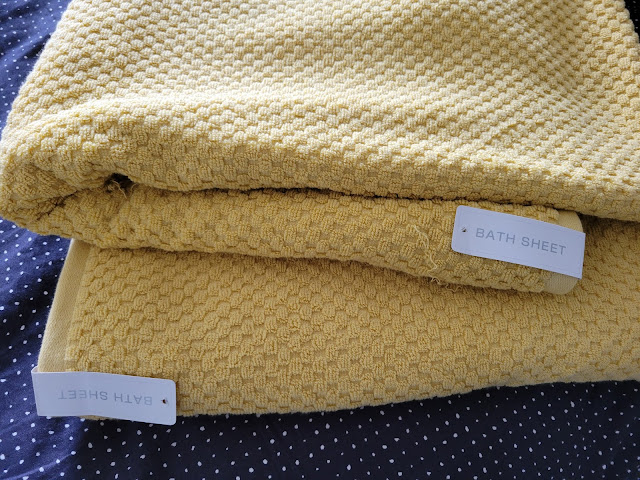 John golfed on Thursday and I did a needed vegetable shopping and John picked up a turkey for Canadian Thanksgiving this weekend.
Our condo recently bought a HD multi sport golf simulator and set it up in its own room downstairs.
John tried it out on Friday and was totally thrilled with it.
COOKING
Saturday - family dinner
Sunday - family big breakfast and cheeses for dinner.
Monday I cleaned out my fridge which led me to bake because we had old apples and two open containers of cream cheese. Cream cheese apple cake turned out really well and is a keeper. In fact it is already in My Recipe Box!
I did a beef short ribs and lamb kidney stew.
Tuesday
Ham, potato cauliflower Brussels sprouts au gratin - the vegetables needed to be used up.
Wednesday fish chowder, updated recipe link.
Thursday chicken a la orange, haven't had this in ages it is a 1980s family recipe.
Friday steak with baby bok choy, onions, bean sprouts in a honey siracha sauce.
I spent some time updating my recipe box. It has become a mishmash of recipes I have posted and links to other recipes that I made. For example, I had a clam chowder from 2018, a smoky bacon chowder from 2020 and a fish chowder from Jamie Oliver's 30 Minute cookbook. In reality I use all three in some form to make a fish chowder so I combined them into one recipe.
I also started cleaning out paper copies of recipes that we like and posted them in my blog. I even had several copies of the same recipe printed out!
Basically if we find something we really like I will post it and use that one going forward.
All my recipes are gluten free.
Cinnamon raisin quick bread
Cinnamon roll cake
Cranberry pumpkin loaf
Build a salad dressing
Blueberry banana bread
I made several soups.
WATCHING
We got caught up on our recorded series - Blue Bloods, Dr. Death, Billions, American Rust.
We started watching Squid Game a South Korean survival drama series. We have seen five episodes so far and we will finish it. My biggest problem is the voice over actors are so bad!! But it is definitely binge worthy.
Tuesday at the Movies
Kate 2021 American action thriller - fun, entertaining.
Knock Knock 2015 Eli Roth's intention, he says in the film’s press notes, was to demonstrate how much more quickly we experience everything in the social media age—both the delights and the torments—and how the rules of civilized society no longer seem to apply. This was my kind of horror movie! Fun and cringy. WARNING lots of sex!
READING
Not much reading this week, not sure why as we didn't really go anywhere.
I finished Deadly Revenge, just an okay read.
I couldn't finish The Twenty-seventh City by Franzen.
I started Invisible City by Julia Dahl, not greatly written but I always enjoy a look into a closed religious community like Hassidic Jews.
Posted by Jackie McGuinness at 9:35 AM