March 2021 - Toronto ON
Click here for a history of Toronto lane naming and a list of other lanes. That post is a work in progress, and gets updated frequently.

Shady Lane so named as it is blessed with more shade than many neighbouring lanes.

Shady Lane just happens to be a few steps from one of the weirdest/oddest houses in Toronto! Check out that link! 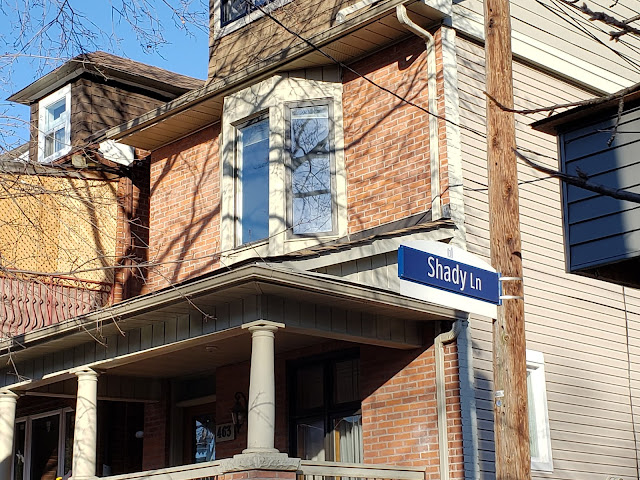 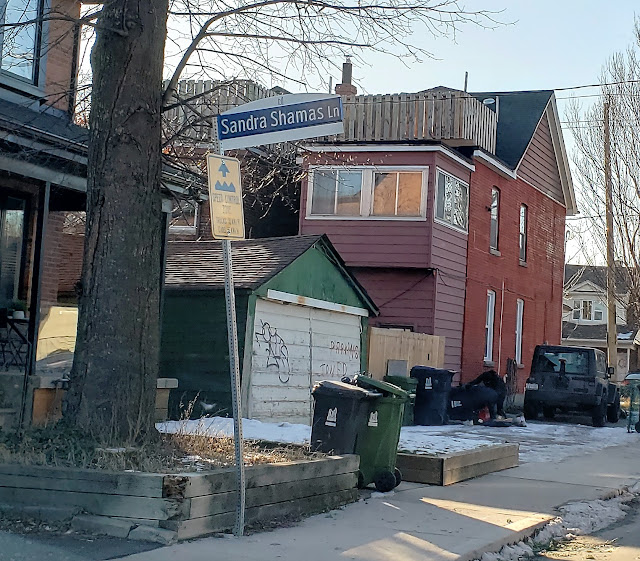 Born in Sudbury, Ontario in 1957, Sandra moved to the Bloor/Bathurst area of Toronto in 1985. She began her theatrical career with Second City comedy troupe, worked in Improv theatre and doing stand-up comedy, then worked as a puppeteer for the legendary Jim Henson (the Muppets, Fraggle Rock).
In 1987, Sandra was inspired to write and produce a series of one-woman autobiographical shows. Her first show, entitled My Boyfriend's Back And There's Gonna Be Laundry, debuted at the Edmonton Fringe Festival, where she performed it to sell-out crowds. It was her first experience in solo theatre, and as she later said, the first time she had stood alone on a stage for more than seven minutes in her entire life.
She brought the show back to Toronto, where she produced and performed it at Factory Theatre. Again, it was very successfully received. Encouraged by Its reception, Sandra wrote, produced and performed a second show, entitled My Boyfriend's Back And There's Gonna Be Laundry: The Cycle Continues.
Sandra Shamas describes these formative years in this neighbourhood as among the happiest of her young life.
A third show, entitled Wedding Bell Hell, followed on the heels of her first two shows. To date, Sandra has written, produced and performed seven one-woman shows. She has taken her shows to the USA and to London’s Old Vic Theatre. She has won a Gemini Award for Best Performance in Comedy, an HBO Comedy Award for Theater at the U.S. Comedy Arts Festival, was nominated for a Stephen Leacock Award, and in February 2018 Sandra Shamas was appointed to the Order of Ontario for her immense 30-year contribution to the arts in Toronto.
She remains deeply rooted In the BIoor/Bathurst/Christie neighbourhood of Toronto where her theatrical legacy was first conceived and developed and where she first found a safe and supportive community for her art to develop and thrive.
Consent was given by Ms. Shamas, the named party.
Posted by Jackie McGuinness at 9:31 AM