March 2021 - Toronto ON
Click here for a history of Toronto lane naming and a list of other lanes. That post is a work in progress, and gets updated frequently.
In a previous lane post I had shown Central Hospital Lane and mentioned that Cabbagetown had been a hub of medical activity in years gone by. 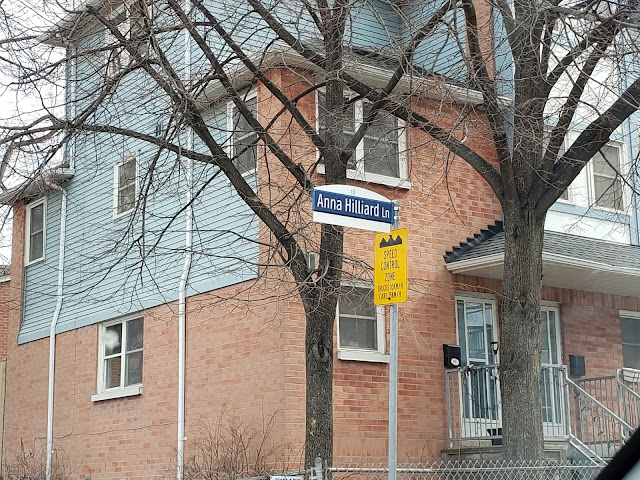 Anna Marion Hilliard, physician (b at Morrisburg, Ont 17 June 1902; d at Toronto 15 July 1958). She studied at the University of Toronto (BA, MB), did postgraduate work in Britain and in 1928 joined the staff of Women's College Hospital, Toronto, where she headed the department of obstetrics and gynaecology from 1947-57. In 1947 she helped devise a simplified Pap test. Her common-sense approach to women's problems, especially those connected with childbirth, brought her many devoted admirers and led to a series of articles that were the basis of her book, A Woman Doctor Looks at Love and Life (1957). She was also the author of Women and Fatigue, published posthumously in 1960. 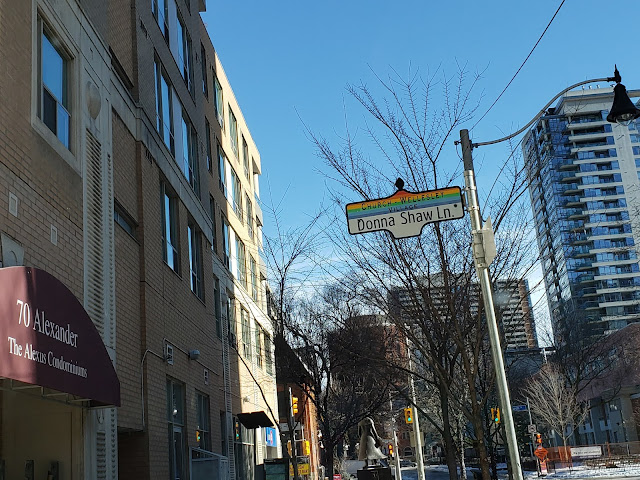 The naming is in honored memory of Ms. Shaw, a former president of The Village Green Tenants Association. Her hard work is responsible both for establishing a working - 2 - relationship between tenants and management as well as for improving the general quality of life for thousands of Village Green tenants over the years.
This lane is not in Cabbagetown but in the St. Clair West neighbourhood.
I also discovered that we missed a mural in that lane so will have to go back. 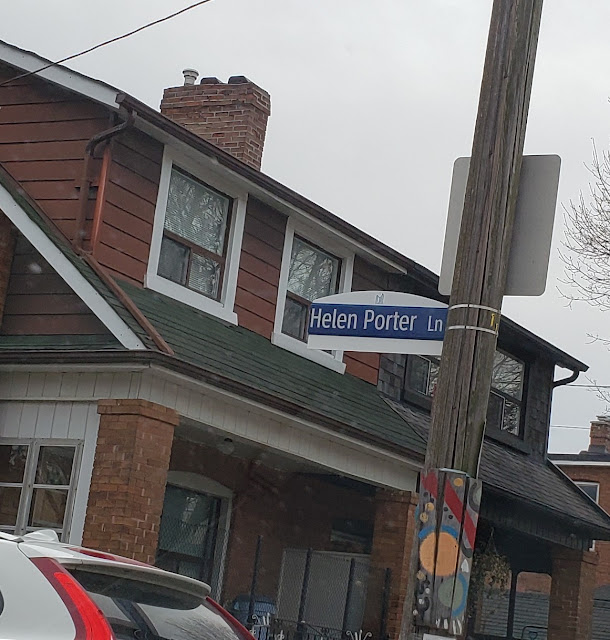 A talented storyteller, Helen Carmichael Porter was very effective at developing complex characters and storylines by seeing the world through various points of view. Always looking for stories in the things she saw, Helen based her works on what she researched and what she created; stories based on historical characters; stories on people she met locally or in her travels; stories on her own experience, transmuted and imagined.
Although she spent much time in other regions such as the Ottawa Valley and the Northern Ontario Lakelands, Helen's roots were still strong in this city, obtaining a Master's Degree at the University of Toronto, and teaching English and Drama at the Vaughan Road Collegiate Institute. Some of Helen's contributions to the community include her published stories – My Father Taught Me to Swim, My Grandmother's Mouth, I Love You So Much It Hurts, and The Bully and Me: Stories that Break the Cycle of Torment. The latter saw great success on her tours in countless schools – a testament to Helen's ability to connect with other people's issues and struggles.
Some other venues she told her stories in were the National Arts Centre, the Blyth Festival, St. Lawrence Centre, Roy Thomson Hall, the Hans Christian Anderson statue in Central Park (New York), and on CBC radio, television, and film. Helen passed away in 2007.
Posted by Jackie McGuinness at 2:37 PM