This photo captures two ghost signs and a neon sign in the background.

On the left - “Tip Top Tailors Suits and O’Coats Made to Measure.”

I searched through the Ontario  Heritage Acts web site to find the following information.

Founded by David Dunkelman in 1909 to manufacture men’s clothing, Tip Top Tailors became one of Canada’s leading retailers in the 20th century.

The cultural heritage value of the property at 260 Richmond Street West is related to its design or physical value as a representative example of an industrial building from the World War I period that displays a high degree of craftsmanship with the application of terra cotta on portions of the principal (south) façade. The cultural heritage value of the Tip Top Tailors Warehouse also relates to its historical or associative value as it reflects the practices of Toronto architect Isadore Feldman and the architectural firm of Kaplan and Sprachman. Feldman, whose individual commissions included the American Hat Frame Company Building at 49 Bathurst (a recognized heritage property), designed the Tip Top Tailors Warehouse before forming a partnership with J. P. Hynes and A. E. Watson in 1915. As Hynes, Feldman and Watson, the firm’s projects included all types of buildings, among them Allen’s Theatre (now known as the Music Hall) at 147 Danforth Avenue, which is included on the City of Toronto Inventory of Heritage Properties. Harold Kaplan and Abraham Sprachman were among the first practicing Jewish architects in Toronto, and were known for their designs for movie theatres across Canada, beginning in 1936 with the completion of the Eglinton Theatre at 400 Eglinton Avenue West (the property is designated under Part IV of the Ontario Heritage Act).

This sign is included as part of the Heritage Act.
The portions of the east and west elevations, extending 33 feet or 10.06 metres from the south façade, with the light-coloured brick cladding, the quoins and, on the west wall only, the painted signage reading “TIP TOP TAILORS SUITS AND O’COATS MADE TO MEASURE”.

The cultural heritage value of the Tip Top Tailors Warehouse is also associated with its contextual value as it defines and supports the industrial character of the area. The property is situated south of Queen Street West within the King-Spadina neighbourhood where neighbouring properties include the Wesley Building (now known as the CHUM-City Building) at 299 Queen Street West, which displays similar terra cotta cladding and is designated under Part IV of the Ontario Heritage Act.

Here is a better shot of the CHUM sign.

Originally erected in 1959 at 1331 Yonge St., the sign received its first restoration in the late 1970s. It suffered significant damage when the station’s tower was sabotaged in August 1986. Two nearby residents who believed that the tower interfered with their television reception decided, after a healthy drinking session, to crawl onto the station’s roof with a pair of bolt cutters. The perpetrators, later convicted for “mischief endangering the lives of others,” were not prepared for how quickly the tower toppled onto Yonge Street, crushing the “CH” portion of the sign. Stories vary as to whether the sign was repaired or replaced with a replica after this incident.

In 2009 it was moved to their new location at Richmond and Duncan. 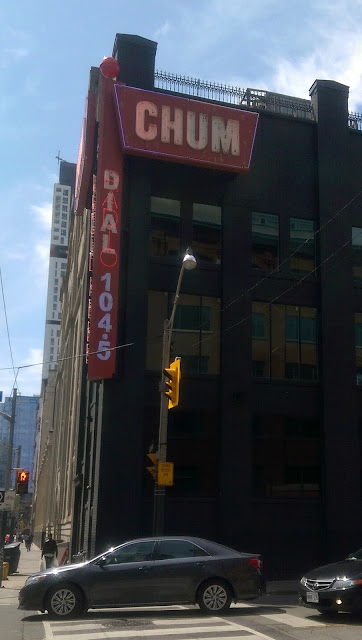 The Ontario Jewish Archives notes The Gelber Brothers were named Louis and Moses and were born in what is now Austria. The brothers co-founded the Imperial Clothing Company, which would become Gelber Brothers Woollens as advertised in this ghost sign. This building on Richmond Street, behind 299 Queen Street West, was their head office designed by Benjamin Brown, who also built the Tower Building and Balfour Building on Spadina and Adelaide. The brothers were prominent members of the Toronto Jewish Community and were actively involved with many Jewish organizations and charitable activities.

I viewed an exhibit on Benjamin Brown a couple of weeks ago and wrote about it here.

Posted by Jackie McGuinness at 11:13 AM