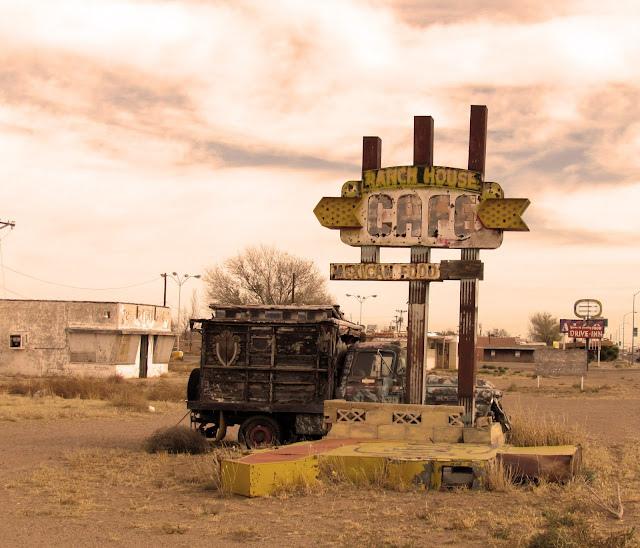 I played around with the photo in Photoshop to give it an older feel.
It is so sad to see these images of small town America disappearing.
For many years, Tucumcari has been a popular stop for cross-country travelers on Interstate 40 (formerly U.S. Route 66 in the area). It is the largest city on the highway between Amarillo, Texas and Albuquerque, New Mexico.
In 1901, the Chicago, Rock Island and Pacific Railroad built a construction camp in the western portion of modern-day Quay County. Originally called Ragtown, the camp became known as Six Shooter Siding, due to numerous gunfights. Its first formal name, Douglas, was used only for a short time. After it grew into a permanent settlement, it was renamed Tucumcari in 1908. The name was taken from Tucumcari Mountain, which is situated near the community. Where the mountain got its name is uncertain. It may have come from the Comanche word "tukamukaru", which means to lie in wait for someone or something to approach. A 1777 burial record mentions a Comanche woman and her child captured in a battle at Cuchuncari, which is believed to be an early version of the name Tucumcari.

Here's a video of the area.

The Tucumcari Chamber of Commerce realized how many songs featured their town that they put together a CD. Who'd thought that many songs would be about this little town??

Posted by Jackie McGuinness at 3:04 PM