Sandra from Writing With a Texas Twang wrote about her charm bracelet. That inspired me to pull out mine, take some photos and write about them.
As a trip down memory lane this worked like a charm!


What got this charmed life started? I had a boy pen pal, John Tehan from around Boston. I had tons of pen pals at that point, I was 14 or 15. You would get their names from a section in Teen magazine.

For Christmas one year John (not the John that I married) sent me a charm bracelet with a Christmas tree on it. It wasn't real gold. I replaced the bracelet at some point in my early 20s but kept the Christmas tree in all its worn glory. 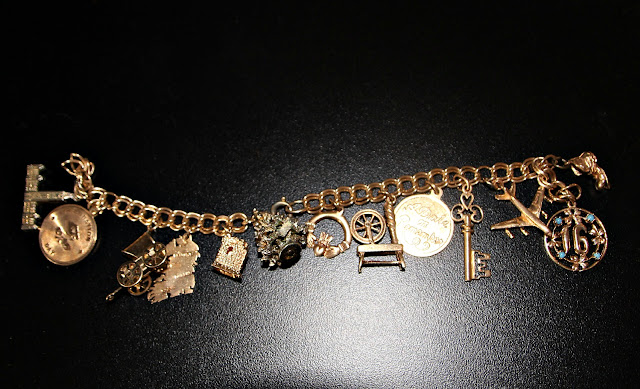 My parents bought me my Sweet 16 and my high school graduation charms.

Then I went on my first trip to Ireland (without my parents) and bought the plane, map of Ireland, Blarney Castle, spinning wheel and Claddagh.

The Parliament Buildings in Ottawa were from a trip there.
No idea what the wagon or old shoe represented.
A Date to Remember - from my first wedding? Key - to my heart or first apartment?
There are a few loose charms that should be added.
An ivory elephant - from my sister's years in Africa
A crown - bought in London


I started a silver bracelet some time in my mid to late twenties. These charms date from 1978 to around 1991. 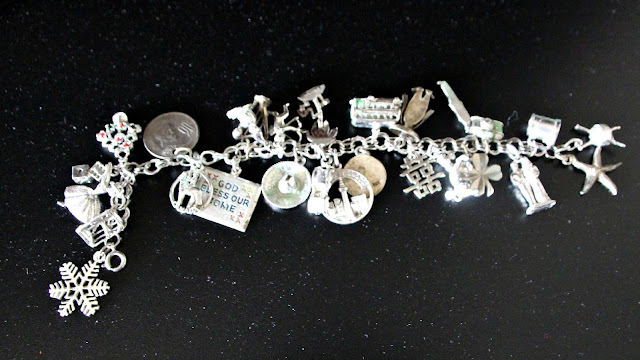 
After the early 1990s I stopped buying charms.

AND I resisted the Pandora craze UNTIL I went to DisneyWorld for a friend's birthday in November 2013 and found a cute Minnie Mouse cheap $5 Pandora style charm. It was downhill from there.
I had to buy a bracelet when we stopped in Las Vegas after that and a Vegas charm. 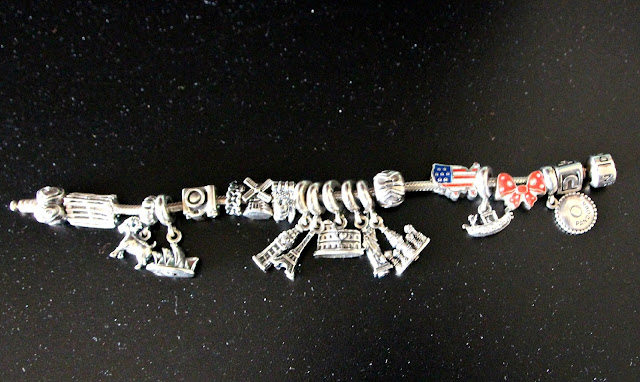 Then I had a gift card so I bought
A flag of the US - we visit there so often that it represents all the various States.
A Venetian gondola - Italy 2004
And it just kept growing as I and my husband bought mementos of some recent trips.
The letter U for my sister who passed away in 2013.
St. Basil in Moscow - 2011
Forum in Rome
Statue of Liberty 2013
Eiffel Tower 2012
Big Ben 2012
Camel Egypt 2007
Windmill Amsterdam
Aloha Hawaii - many trips
Camera - still loving taking photos
Lobster trap PEI 2014
Sydney House represents Australia and New Zealand 2015
Year of the Goat for Singapore, Thailand, Cambodia and Vietnam 2015
Camera black from my BFF
I love you from my husband bought in LV 2015
Palm tree from Palm Springs 2015.

So many now that in March 2016 John bought me another bracelet to handle the overload. 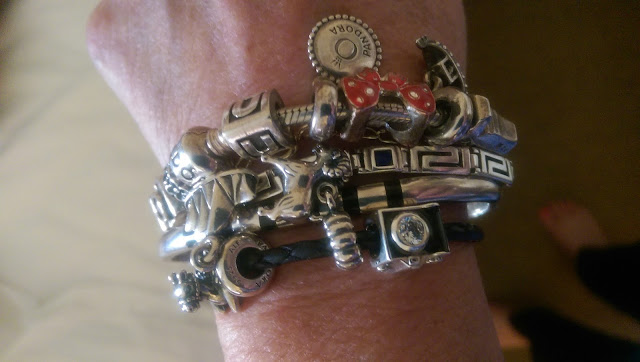 When my Mom died I got her silver charm bracelet. Charms were given to her by my sister, myself and my Dad.
Her bracelet is big and chunky. 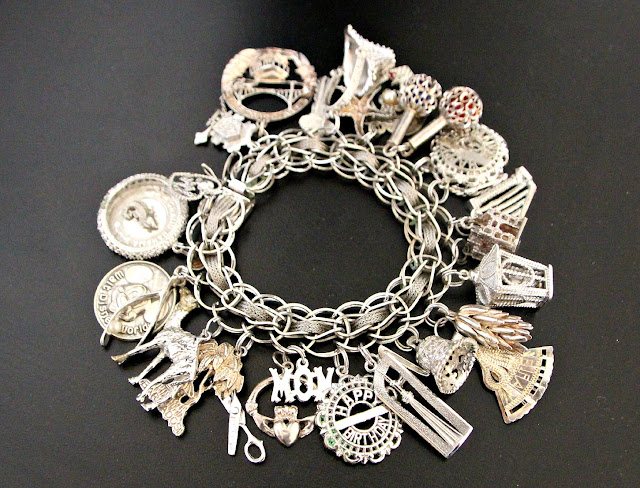 All photography on Junk Boat Travels are under copyright unless stated otherwise.

Posted by Jackie McGuinness at 12:54 PM