Another period of not much reading, but then it's been a beautiful busy autumn. 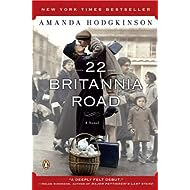 Frustrating read! Writing was very good. But these characters, nothing likeable about any of them or believable. It's about a couple's experiences during the war as they are separated and have to mange for themselves in horrific circumstances.
But...you just can't feel the husband-wife relationship. At the beginning they are just teenagers from different environments who get pregnant. When they reconnect after the war there just isn't any feeling between them.

When debutante Wallis Simpson is growing up, she devotes her teenage daydreams to one man, the future King of England, Prince Edward. But it's Pamela Holtby, Wallis's aristocratic best friend, who mixes within the palace circle. Wallis's first marriage to a dashing young naval pilot is not what she dreamt of; he turns out to be a dominating bully of a man, who punishes her relentlessly. But her fated marriage does open a suprising door, to the world of Navy couriers – where navy wives are being used to transport messages around the world. This interesting turn of fate takes Wallis from the exuberant social scene in Washington to a China that is just emerging from civil war. Edward in the meantime is busy fulfilling his royal duties – and some extra-curricular ones involving married women. Until the day, just before he ascends the throne as Edward VIII, he is introduced to a very special married woman, Wallis Simpson. Was Wallis Simpson really the monster the royal family purported her to be? Or was she an extraordinary woman who led an unimaginable life? A dramatic novel, that crosses continents and provides a unique insight into one of history’s most charismatic and multi-faceted women.

I enjoyed this very fictional account of this period in history.  But I do wish the book hadn't ended when Wallis meets Edward.
I found myself having to look things up to determine what was real and what wasn't.

Over eight visits to Paris, Deirdre Kelly has found herself — first as a 19-year-old and then later as a budding writer, a dance critic, and a fashion reporter. Subsequent visits — with her mother, her future husband, and later as a mother herself — have shown her that while some parts of Paris remain constant, her life is always evolving. More than just a beautiful and romantic backdrop for her self-discovery, Paris itself contributes to that discovery, emerging as a principal character in Kelly’s life, an influence that inspires, guides, and teaches as she ages. A terrific gift for budding travelers, Francophiles, and women on their own path toward growth, this book reminds readers of their own favorite place.