I'm posting at Sepia Saturday today.The suggested theme is Bicycles, lads with caps on their heads ... the writing is on the wall.

I am going with lads with caps on their heads. This is a photo of my maternal uncle on his first communion day.
That is a Sacred Heart of Jesus medal on his lapel. He is standing outside my Grandparents' house in Dublin. This is probably in the mid-1940s.
Since he is smiling I am guessing the serious part of the day was over and he had probably received his Communion "money", monetary gifts from family and neighbours. I wonder how much he got?
Today this day has totally gotten out of hand as this Irish Times article points out. 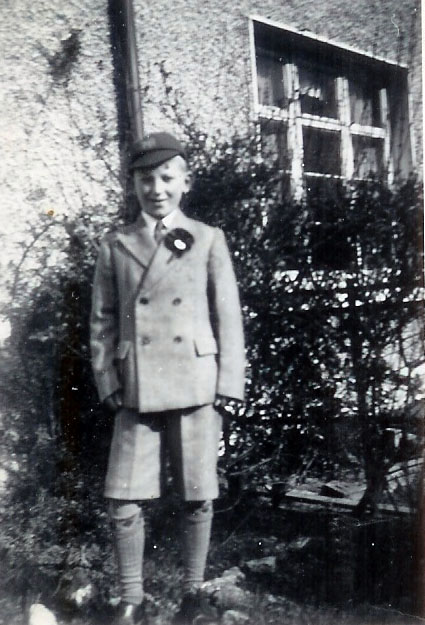 "The night before I was so excited I couldn't sleep till dawn.  I'd still be sleeping if my grandmother hadn't come banging on the door.  Get up! Get up! Get that child outa the bed.  Happiest day of his life an' him snorin' above in the bed.  I ran to the kitchen.  Take off that shirt, she said.  I took off the shirt and she pushed me into a tin tub of icy cold water.  My mother scrubbed me, my grandmother scrubbed me.  I was raw, I was red.  They dried me.  They dressed me in my black velvet First Communion suit with the white frilly shirt, the short pants, the white stockings, the black patent leather shoes.  Around my arm they tied a white satin bow and on my lapel they pinned the Sacred Heart of Jesus, a picture of the Sacred Heart, with the blood dripping from it, flames erupting all around it and on top a nasty-looking crown of thorns.  Come here till I comb your hair, said Grandma.  Look at that mop, it won't lie down.  You didn't get that hair from my side of the family.  That's the North of Ireland hair you got from your father.  That's the kind of hair you see on Presbyterians.  If your mother had married a proper decent Limerickman you wouldn't have this standing up, North of Ireland, Presbyterian hair.  She spat twice on my head.  Grandma, will you please stop spitting on my head.  If you have anything to say, shut up.  A little spit won't kill you.  Come on, we'll be late for Mass.  We ran to the church.  My mother panted along behind with Michael in her arms.  We arrived at the church just in time to see the last of the boys leaving the altar rail where the priest stood with the chalice and he host, glaring at me.  Then he placed on my tongue the wafer, the body and blood of Jesus.  At last, at last.  It's on my tongue.  I draw it back.  It stuck.  I had God glued to the roof of my mouth.  I could hear the master's voice.  Don't let that host touch your teeth for if you bite God in two you'll roast in hell for eternity.  I tried to get God down with my tongue but the priest hissed at me.  Stop that clucking and get back to your seat.  God was good.  He melted and I swallowed Him and now, at last, I was a member of the True Church, an official sinner.  When the Mass ended there they were at the door of the church, my mother with Michael in her arms, my grandmother.  They each hugged me to their bosoms.  They each told me it was the happiest day of my life.  They each cried all over my head and after my grandmother's contribution that morning my head was a swamp."