Tom the backroads traveller hosts this weekly meme.
Travel Tuesday
Our World Tuesday
Image-in-ing
My Corner of the World
Postcards
Toronto ON
Click here for a history of Toronto lane naming and a list of other lanes with neighbourhood descriptions. That post is a work in progress, and gets updated frequently.
Epworth Manse
To commemorate 122 years of Protestant congregations who held services in the Epworth Methodist, later United Church. What began as the Christie Street Mission around 1883, in a wooden structure at the northeast corner of Christie and Yarmouth Road, served the poor and working class families of Seaton Village. As the population and congregation grew, a permanent brick church was begun in 1886 as designed and built by architect Henry Bauld Gordon (1854-1951) with the firm of Gordon & Helliwell of Toronto. It was officially opened on August 2nd, 1890. 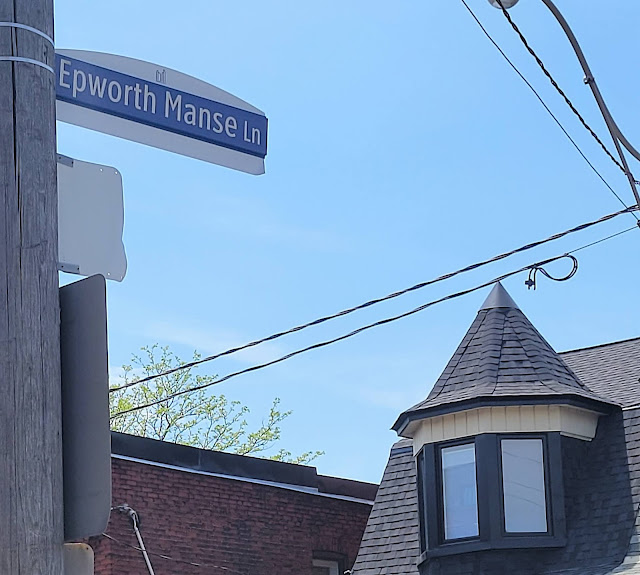 The Manse built behind the Church was first used by the Pastoral family and in later years by the caretaker of the Church which included an underground tunnel to the Church's basement for easy winter access.
At one point in its life, Epworth United Church could boast of a Sunday school of over 500 children.
By the late 1970s the Congregation numbers were declining and in 1979, with the acceptance of the United Church Presbytery of Toronto, formed a three point Congregation with St. Matthews Church on St. Clair Ave. West and Oakwood Church. This kept the Church in the area but a Minister and staff were shared by all three. Finally in 1980, with the decision being made by the Congregation, it was decided that it could no longer remain as a United Church and amalgamated with St. Matthews. Epworth was sold to the East Toronto Korean Presbyterian Church and remained as their Church for 25 years.
The Church was bought by a developer in 2005 and torn down to make room for houses.
Pirillo Lane
An application was made by Sylvia Pirillo, to name the lane east of Clinton Street, extending south from Dupont Street as "Pirillo Lane". 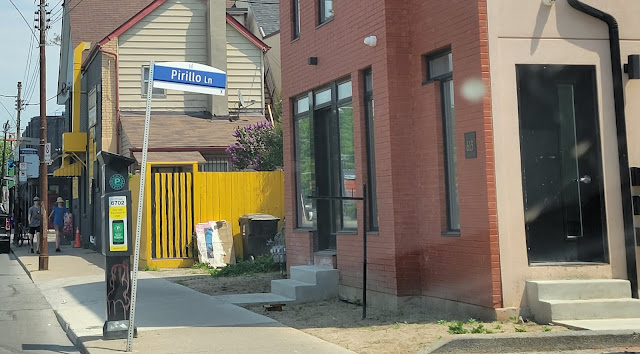 "My family has lived at 908 Manning Avenue since 1959. Naming the laneway would honour the memory of my parents..."

"My father originally arrived on his own in Canada in 1950 via the ocean liner Constitution in search of a better life for his family. He worked in Montreal and Niagara Falls for General Electric, namely building the hydroelectric generating station.

He returned to Italy in 1955 to prepare his wife and three children for the move to Canada.

In 1957, he returned to Toronto where he began working at the TTC. In 1959, after working and saving enough money he bought the family home on Manning and his family arrived during the same year. Two more children were born at this home during the 1960s.

My parents sponsored 2 families from Italy in order to help them emigrate to Canada. One family in the 1960s and one in the 1970s. Both families resided at 908 Manning until they were financially stable enough to move into their own homes. My dad's generosity and compassion continued until his passing in 1987.

My mom continued her spirit of giving and helping as well. Later in life, when she needed nanny care she effectively sponsored 5 nannies from the Philippines. They also resided at the family home. This was beneficial in helping them gain stability and independence in Canada.

My sister owned 906 Manning Avenue during the 1970s. She again demonstrated a similar compassion by sponsoring a Vietnamese family within her home. The children went on to become dentists and doctors.

My families' story displays what Canada stands for. A place where a newcomer, an immigrant can make positive difference in his own life his family's life while contributing to the wellbeing of others in the neighbourhood. It is this passion that continues in my family today and it will hopefully transfer into the naming on the laneway in the rear of 908 Manning Avenue."
Posted by Jackie McGuinness at 12:30 AM