June 2021 - Toronto ON
Click here for a history of Toronto lane naming and a list of other lanes with neighbourhood descriptions. That post is a work in progress, and gets updated frequently.
This week we're in the Entertainment District. 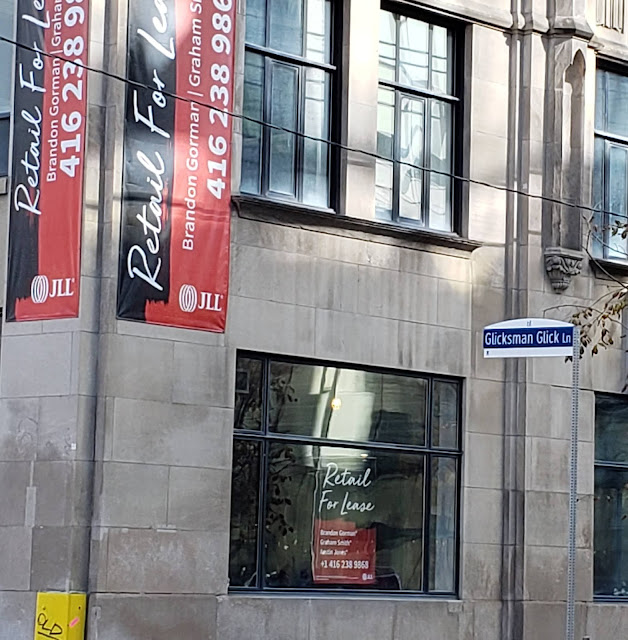 Glicksman Glick Lane
Max Glicksman and Morris Glick were two brothers with a long and positive association with the King-Spadina area. After being uprooted from their home in Poland during World War II, enduring slave labour, confinement to various ghettos, and a concentration camp they immigrated to Canada in the late 1940s with little money but boundless ambition.
They had been apprenticed as tailors in Poland so they worked briefly for others in the garment shops of Spadina Ave.
In the early 1950s they began the manufacture of their own line of men’s outerwear in the basement of Morris’ home under the name “Slick Brothers”. Their business quickly grew allowing them to rent manufacturing space on Richmond Ave. West, just east of Spadina. They acquired the reputation as the hardest working men on Spadina”. With hard work came a measure of prosperity allowing them to purchase, in partnership with the two Koplowitz brothers, 46 Spadina Avenue. The third and fourth floor of that building became home to their expanding business which they now called Mac Mor Sportwear Limited (“Mac” for Max and “Mar” for Morris). In the early 1970s they purchased 366 Adelaide Street West, upgrading the building and moving Mac Mor there. At its height, the business occupied five floors, providing employment for 250 people and selling their products throughout Canada. In the mid-1980's Max’ son Harry and Morris’ son, Martin, joined the business which, at that time, not only manufactured and imported men’s outerwear but, with the purchase of other buildings in the area, became a landlord to many of the other clothing manufacturing businesses in King Spadina.
With the decline of clothing manufacturing in Canada in the early 1990s, the brothers recognized that the buildings they owned would have to be repurposed. With other property owners they advocated with the City of Toronto to change the zoning by-laws to permit non-manufacturing uses and ultimately the City agreed, designating King Spadina as a Regeneration Area. With the incentive that the change in zoning provided, the brothers initiated a program of revitalizing their buildings, including upgrading their electrical and mechanical systems, installing new windows and providing high speed internet connectivity. Those buildings now house a variety of businesses in the creative economy ranging from architects to software developers to interior designers. The City of Toronto has recognized three of the buildings with heritage designations and, thanks to the brothers’ vision, they can be expected to remain vibrant parts of the City’s heritage fabric for many years to come. Max Glicksman passed away in 2010 and Morris Glick passed away in 2014 but the Glick and Glicksman families maintain ownership of the properties the brothers acquired operating under the name Capitol Buildings. It is fitting that the lane that is proposed to bear their name abuts 317 Adelaide Street West, the Commodore Building, a designated heritage building and one that has graced the cover of reports by the City of Toronto Planning Department dealing with heritage issues.

Jack Cooper, opened a used furniture store in 1943 and shortly after, his father, Irving Cooper, a successful furniture entrepreneur in Belleville, Ontario, joined his son. Within a few years, the business evolved into an office furniture business.

Looking through their 1958 catalogue a metla deskwas at priced at $26.95.
In the early days, Cooper’s established Canada’s largest mail-order office furniture business. Back then, when names on a mailing list were printed on a metal addressograph plate, Cooper’s mailing list contained more than a million separate addresses.