it's Monday! What Are You Reading?

This week I am also linking this post to An Accidental Blog, Dreaming of France. 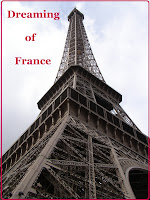 Other than enjoying reading about a city I love, Paris, and my home town, Toronto where the author grew up and worked for the Globe and Mail, this book was quite boring. Considering she is a reporter the writing is rather pedestrian. She is self-absorbed and not terribly interesting, never sees her own shortcomings and everything is someone else's fault.
She is also a snob about Paris, I am glad I never had to visit that incredible city with her.
There are grammatical errors as well as timing issues.
I ended up googling the author who continues to write for the Globe and Mail. She also writes a personal blog which I have to admit reads better than her book.

An inheritance from a mysterious stranger . . .An abandoned perfume shop on the Left Bank of Paris . . .And three exquisite perfumes that hold a memory . . . and a secretLondon, 1955: Grace Monroe is a fortunate young woman. Despite her sheltered upbringing in Oxford, her recent marriage has thrust her into the heart of London's most refined and ambitious social circles. However, playing the role of the sophisticated socialite her husband would like her to be doesn't come easily to her—and perhaps never will.Then one evening a letter arrives from France that will change everything. Grace has received an inheritance. There's only one problem: she has never heard of her benefactor, the mysterious Eva d'Orsey.So begins a journey that takes Grace to Paris in search of Eva. There, in a long-abandoned perfume shop on the Left Bank, she discovers the seductive world of perfumers and their muses, and a surprising, complex love story. Told by invoking the three distinctive perfumes she inspired, Eva d'Orsey's story weaves through the decades, from 1920s New York to Monte Carlo, Paris, and London.But these three perfumes hold secrets. And as Eva's past and Grace's future intersect, Grace realizes she must choose between the life she thinks she should live and the person she is truly meant to be.Illuminating the lives and challenging times of two fascinating women,The Perfume Collector weaves a haunting, imaginative, and beautifully written tale filled with passion and possibility, heartbreak and hope.

Situated in Paris and London during WWII and the early 1950s we alternate chapters between the two cities and periods.
I also didn't know very much about the art and chemistry of making perfume.
I loved Eva and would have liked to know even more about her life. Grace was interesting as she described her life married to an obnoxious husband in London.

Monsignor Hugh O'Flaherty is an unsung hero in his native Ireland. During the German occupation of Rome from 1942 to 1944, he ran an escape organization for Allied POWs and civilians, including Jews. He placed thousands in safety and was known as 'the Pimpernel of the Vatican'. When the Allies entered Rome he had saved over 6,000 lives.