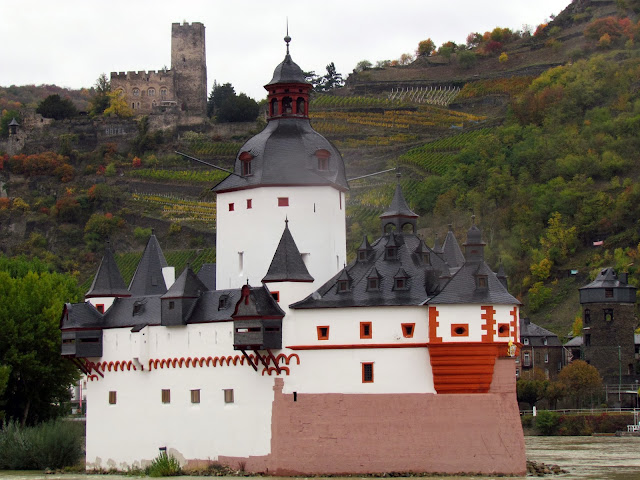 It was a rainy afternoon as we sailed the Rhine but we still managed to get some photos of the magnificent castles.Pfalzgrafenstein Castle is a toll castle on the Falkenau island, otherwise known as Pfalz Island in the Rhine river near Kaub, Germany. 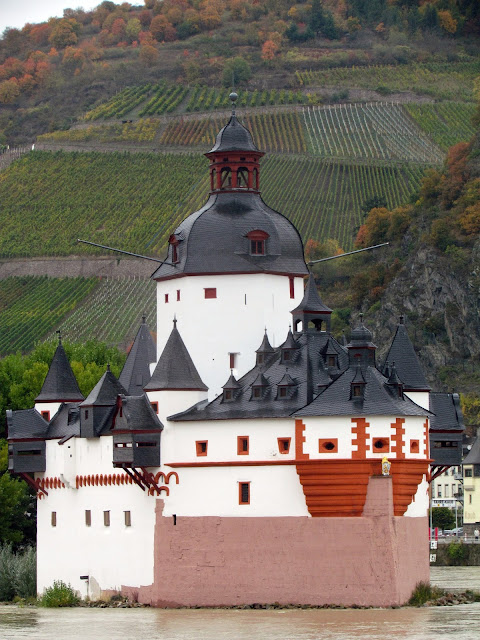 The keep of this island castle, a pentagonal tower with its point upstream, was erected 1326 to 1327 by King Ludwig the Bavarian. Around the tower, a defensive hexagonal wall was built between 1338 to 1340. Later additions were made in 1607 and 1755, consisting of corner turrets, the gun bastion pointing upstream, and the characteristic baroque tower cap.

The castle functioned as a toll-collecting station that was not to be ignored, as it worked in concert with Gutenfels Castle and the fortified town of Kaub on the right side of the river. A chain across the river forced ships to submit, and uncooperative traders could be kept in the dungeon until a ransom was delivered. The dungeon was a wooden float in the well.

Unlike the vast majority of Rhine castles, "the Pfalz" was never conquered or destroyed, withstanding not only wars, but also the natural onslaughts of ice and floods by the river. Its Spartan quarters held about twenty men.