Taken on January 27 outside Luxor in Las Vegas. 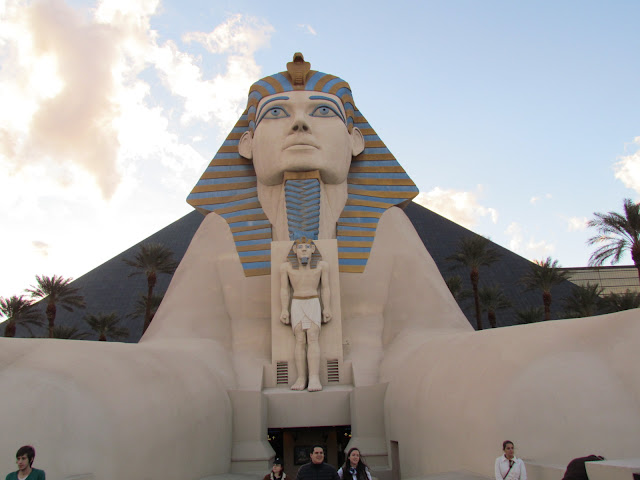 The Luxor is the second largest hotel in Las Vegas, MGM Grand is the largest.
The main portion of the hotel is a 365-foot (111 m)-high, 30-story pyramid encased in 11 acres of dark bronze glass. The guest rooms are situated on the outer walls of the pyramid and are reached by riding in "inclinators" that travel along the inner surface of the pyramid at a 39-degree angle. The hotel also features a 29 million cubic feet (820,000 m³) atrium, which was the largest open atrium in the world when it was built in 1993. The hotel is marked by a 140-foot (43 m)-high obelisk and a 110-foot (34 m)-tall re-creation of the Great Sphinx of Giza. The tip of the pyramid contains a fixed-position spotlight that points directly upward and is claimed to be the brightest beam in the world at over 42.3 billion candle power.
Posted by Jackie McGuinness at 7:54 PM