I've been waiting forever to feature this song! I needed a photo and we finally got it the other day.


"Jane" is a song by Barenaked Ladies from their 1994 album Maybe You Should Drive.

The title character is "Jane St. Clair", and is named after the intersection of Jane Street and St. Clair Avenue in Toronto. Steven Page recalls that co-writer Stephen Duffy saw the intersection on a map and remarked that it sounded like the most beautiful intersection in the world; Page "didn't wanna break his heart to tell him it wasn't." Trust me, it is not beautiful in any definition of the term!!! 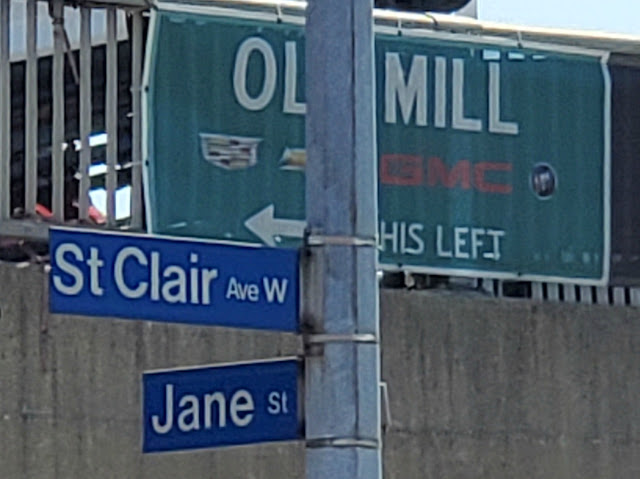 The girl works at the store, sweet Jane St. Clair
Was dazzled by her smile while I shopped there
It wasn't long before I lived with her
I sang her songs while she dyed my hair
Jane, divided, but I can't decide which side I'm on
Jane decided only cowards stay, while traitors run
Jane, Jane
I'd bring her gold and frankincense and myrrh
She thought that I was making fun of her
She made me feel I was fourteen again
That's why she thinks it's cooler if we'd just stay friends (she thinks it's cooler being)
Jane doesn't think a man could ever be faithful
Jane isn't giving me a chance to be shameful
Jane, Jane
I wrote a letter, she should have got it yesterday
That life could be better by being together
Is what I cannot explain to Jane
The girl works at the store,…
Posted by Jackie McGuinness at 1:00 AM