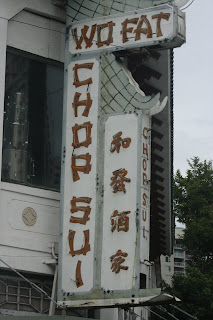 We ventured out by bus to Chinatown and had a great time following Frommer's walking directions. We then stopped at ta market and ate in the food court wher John had the lucky experience of a cockroach trying to climb his leg. it absolutely freaked me!! 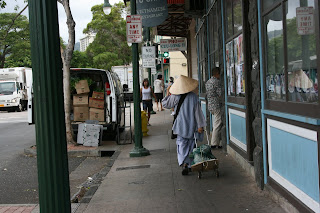 Chinese laborers from Guangdong Province first came to work on Hawaii's sugar and pineapple plantations in the 1850s. They quickly figured out that they would never get rich working in the fields; once their contracts were up, a few of the ambitious started small shops and restaurants in the area around River Street.
Chinatown was twice devastated by fire, once in 1886 and again in 1900. The second fire still intrigues historians. In December 1899, bubonic plague broke out in the area, and the Board of Health immediately quarantined its 7,000 Chinese and Japanese residents. But the plague continued to spread. On January 20, 1900, the board decided to burn down plague-infected homes, starting at the corner of Beretania Street and Nuuanu Avenue. But the fire department wasn't quite ready; a sudden wind quickly spread the flames from one wooden building to another in the densely built area, and soon Chinatown's entire 40 acres were leveled. Many historians believe that the "out-of-control" fire may have been purposely set to drive the Chinese merchants -- who were becoming economically powerful and controlled prime real estate -- out of Honolulu. If this was indeed the case, it didn't work: The determined merchants built a new Chinatown on the same spot.
Chinatown reached its peak in the 1930s. In the days before air travel, visitors arrived here by cruise ship. Just a block up the street was the pier where they disembarked -- and they often headed straight for the shops and restaurants of Chinatown, which mainlanders considered an exotic treat. In the 1940s, military personnel on leave flocked here looking for different kinds of exotic treats -- in the form of pool halls, tattoo joints, and brothels.
Today, Chinatown is again rising from the ashes. After deteriorating over the years into a tawdry district of seedy bars, drug dealing, and homeless squatters, the neighborhood recently underwent extensive urban renewal. Just enough sleaze still flourishes on the fringes (a few peep shows and a couple of topless bars) to keep it from being a theme park-style tourist attraction, but Chinatown is poised to relive its glory days.
It's not exactly a microcosm of China, however. What you'll find is a mix of Asian cultures, all packed into a small area where tangy spices rule the cuisine, open-air markets have kept out the mini-malls, and the way to good health is through acupuncture and herbalists. The jumble of streets comes alive every day with bustling residents and visitors from all over the world; a cacophony of sounds, from the high-pitched bleating of vendors in the market to the lyrical dialects of the retired men "talking story" over a game of mah-jongg; and brilliant reds, blues, and greens trimming buildings and goods everywhere you look. No trip to Honolulu is complete without a visit to this exotic, historic district.
Posted by Jackie McGuinness at 9:43 PM