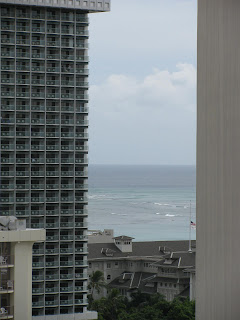 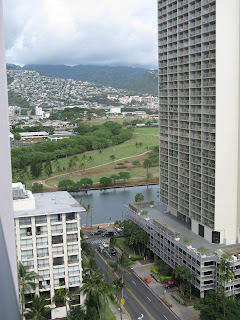 We’ve been to Honolulu before, but it typically is for a stopover going to another island or heading home. We really only knew the Waikiki area and we were anxious to visit the “real” Honolulu.
We are on the 19th floor of the building (1 bedroom condo) and are surrounded by other high-rises. Up early and took some shots from the balcony, it is always a little cloudy in the morning but the temperature is going to 87 degrees. We can see Diamond Head, Waikiki Beach, the municipal golf course from our balcony.
We headed out and went to the Seaside Restaurant next door for a breakfast consisting of 2 pancakes, 2 bacon strips and scrambled eggs.
Well fortified, we changed our minds from taking a cab to Chinatown and decided to take the #2 bus in front of the condo instead. For $2.25 each it was a bargain. 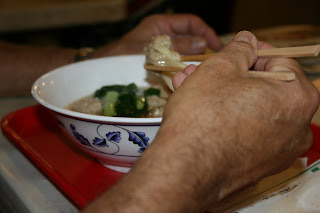 In Chinatown, we followed a walking tour we found online and got many interesting pictures. We stopped for lunch in a food court and had awesome won ton soup.
After Chinatown we did the walk of Historic Honolulu seeing the 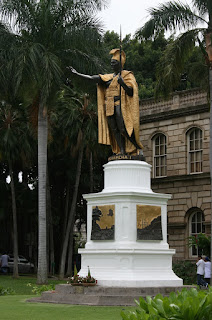 Palace, Washington House, the campus of Hawaii Pacific University.
Then we decided to head back to condo and relax.
We’ll head out for a nice dinner and wander around.
Posted by Jackie McGuinness at 10:04 PM