Getting to Honolulu Nov 8 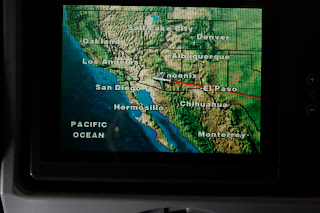 3:30 am came very early. Limo took us to the airport. Checked in and then typical Pearson airport confusion, no US Customs forms handed out or available at counters (all empty), then a pompous security guard (you know the kind – wearing the too big uniform) Insisting that forms must be completed before entering the line. This meant all kinds of people converging at the same time from the check-in counters.
Fight was at 6:05 am however as we were seated the pilot said Pearson had a 6:30am flight curfew so we couldn’t leave until at least then. Then why would an airline schedule a 6:05 flight?? This was a 50 seater plane to Houston. Nice, uneventful flight.
Arrived in Houston with ½ hour to make it to the total opposite end of the airport to catch our flight. This was a full flight going to Honolulu and then on to Guam. Flying time to Honolulu is eight hours. Nice flight, awful food (but free), entertainment system but old, in seat screens, however, you couldn’t select your movie to begin whenever you wished.
Started reading The Girl with the Dragon Tattoo and am totally enjoying it. John is reading one of John Deaver’s latest books. 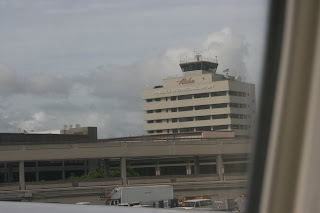 Arrived in Honolulu on time, 2pm local time and grabbed a taxi to the Royal Kuhio (timeshare) downtown Honolulu (Waikiki). We couldn’t check in until 4pm so we went walking around and saw several wedding parties. Finally time to relax so we went to the Outrigger Hotel and had a 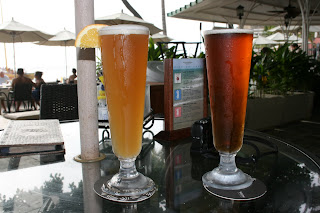 couple of beers. Then it was time to check in and put our feet up so we headed back to the condo and crashed at 5:30 pm (10:30 at home) and planned on getting up at 8pm and going out to dinner. Instead we slept through!!!
Posted by Jackie McGuinness at 9:52 PM