Toronto ON
Click here for a history of Toronto lane naming and a list of other lanes. That post is a work in progress, and gets updated frequently.
Oddly I cannot find any information about this lane name in Yorkville.

Macy DuBois
Gazell Macy DuBois M. Arch, P. Eng, PP-FRAIC, PP-RCA, FAIA (hon) (20 December 1929 – 9 November 2007) was an American-born Canadian architect who designed several landmark Toronto buildings.
Uncertain about a career in engineering, DuBois attended an American Institute of Architects (AIA) conference in Boston, and was inspired to attend the Harvard Graduate School of Design, graduating in 1958. In his final year, he entered the Toronto City Hall design competition with three other student collaborators. Selected as one of 8 semi-finalists from a field of 510 entrants, he moved to Toronto to work on the second round and, although his design was not ultimately selected, soon relocated permanently.
His first major project, begun in 1959, was the combined residence and teaching facility of New College, University of Toronto, with a curved interior courtyard inside a rectilinear facade. It was well received, winning a local architectural design award after completion of phase II, and is considered one of the finest buildings on the campus. 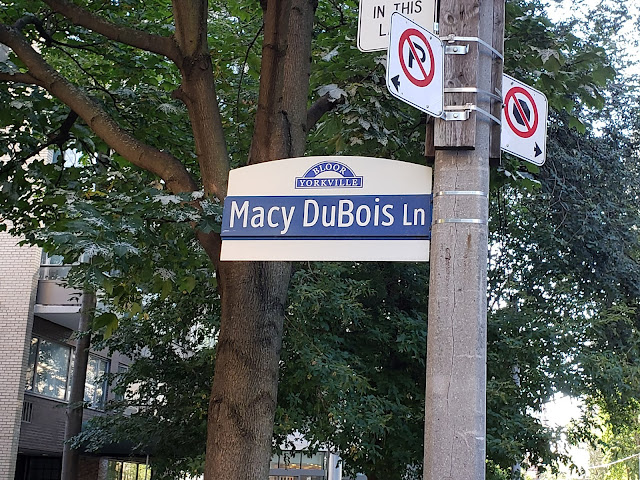 Deborah Brown Lane
In recognition of one of the first residents of Seaton Village, "...at 691 Markham Street where 'Mammy' Brown lived. This cottage is the oldest house in Seaton village, and Mrs. Brooks says: 'Mother lived in it over 50 years. She was 111 when she died, and she's dead 11 years. Mother came from Maryland. She and my father were slaves, and ran away because father was going to be sold." 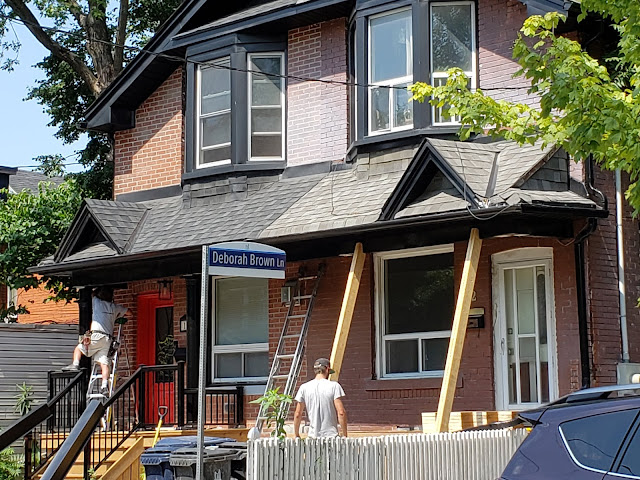 During the mid-19th century, Seaton Village was home to the largest number of African-Canadian and African-American families in York County. Deborah and Perry Brown lived on what is now Markham Street and the Rev. William Mitchell, his wife Elizabeth, and their five children lived nearby.

A land grant dated July 9th,1886, as granted by the then Provincial Lieutenant Governor, John Beverly Robinson, includes the following information; Perry Brown died intestate about 15 years prior (c.1871) leaving his widow Deborah Brown and seized of Lot 133 on the east side of Markham Street, valued at $400. They were formerly slaves in the State of Maryland, came to Canada about 30 years ago (c.1856), settled on the lot and Perry had purchased and obtained a deed for the property in 1870. As Deborah Brown was old and feeble and unable to work or provide for herself, and was in poor circumstances she was granted possession of the property. This gives some credence to the belief that their home was among the first within Seaton village, later numbered 691 Markham Street. Her Death Record and Obituaries titled "Toronto's Oldest Resident", show that she died at the age of 111 on April 24th 1898, but at her death she was residing at "the rear of 108 Chestnut" street, the home of her daughter Mrs. Sarah Brooks. She had lived in her home on Markham up to one month before. The funeral was held at the Seaton Village Methodist Church the next day.
UPDATE: Tom made a good point in his comments below. I am linking up a post I did about the Underground Railway in St. Catharine's, a town just west of Toronto. Harriet Tubman and the Underground Railway.
Posted by Jackie McGuinness at 11:55 AM