Crews were spotted giving a fresh coat of paint to the east-facing wall of the old Maclean Building at 345 Adelaide Street West on Monday, effectively erasing an historic painted sign that dates all the way back to the early 1900s.


Hugh Cameron Maclean - younger brother to John Bayne Maclean, publishing magnate and founder of Maclean's Publishing Company (later known as Maclean-Hunter) - began his career as a typesetter at a young age. He ran away from his childhood home in Crieff, Ont. to find excitement in the big cities of Toronto and New York, earning a living by apprenticing at a variety of printing houses. By the time his brother entered the publishing game Hugh was already an experienced printer and John brought him on board as his partner. 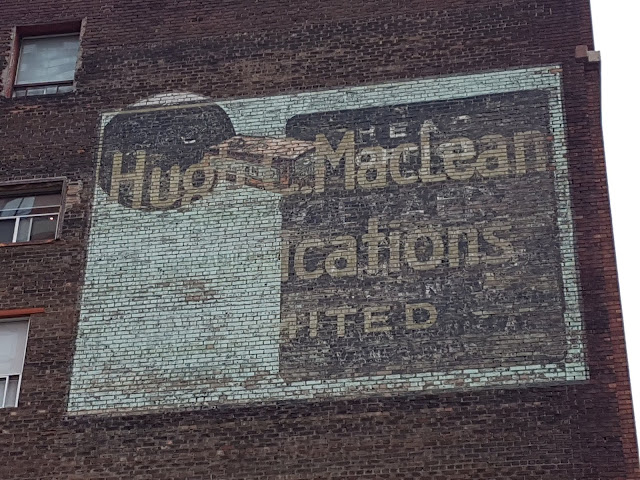 However, this partnership did not last. When Hugh's wife died at the turn of the century and disagreements over advertising caused a rift in the brothers' relationship, Hugh sold his share of the company to John and moved west. Over the course of the next eight years the young Maclean moved from printing to publishing and upon his return to Toronto, created Hugh C. Maclean Publications and finally, in 1914, built the Hugh C. Maclean Building at 345 Adelaide St. W.

With a home for his new company in place, Maclean would finally stay put for the first time in his adult life. The Hugh C. Maclean Publishing Company stayed at 345 Adelaide until Hugh's death in 1949; five years later his company built a modern printery at Don Mills.

Click here to see another Maclean-Hunter building at University and Dundas which was planned by John Maclean as his head office.
Posted by Jackie McGuinness at 1:30 AM