Outside the CBC building on Front St was this sidewalk drawing. 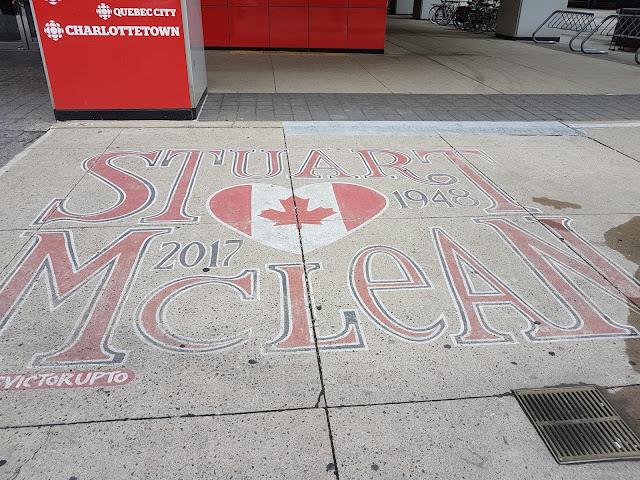 Andrew Stuart McLean, OC, journalist, professor, radio host, author, humorist (born 19 April 1948 in Montréal, QC; died 15 February 2017 in Toronto, ON). An Officer of the Order of Canada, Stuart McLean created The Vinyl Cafe and was one of the CBC’s legendary radio personalities.

We loved to listen to his show The Vinyl Cafe.

Stuart McLean created a radio program called The Vinyl Cafe in 1994 as a summer replacement show. With his signature understated humour, McLean recounts the exploits of a fictional family whose patriarch, Dave, owns "the world's smallest" record store. Aside from McLean’s story telling, a portion of The Vinyl Cafe is dedicated to musical performance.

In 1998, Stuart McLean began taking the Vinyl Cafe on the road to theatres across the country. It is broadcast every week on CBC Radio and is also heard via satellite radio around the world and on public radio stations in the United States.

Posted by Jackie McGuinness at 3:57 PM