While in Palm Springs last week we dropped into the Forest Lawn Cemetery to find some famous graves. Well, doesn't everyone?


California Dreamin' - The Mamas and The Papas

Perhaps, in this case, it should be infamous? As John Phillips was not a nice person. 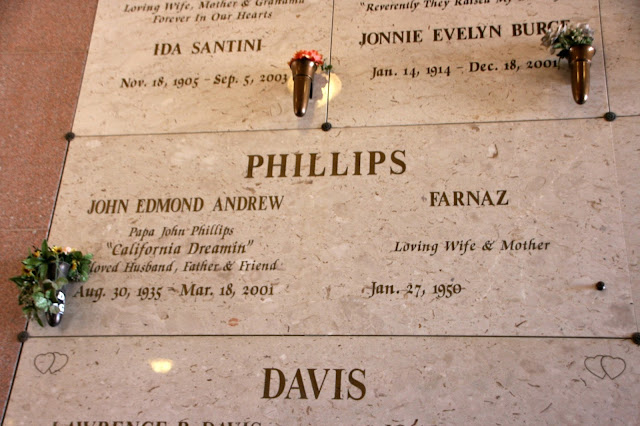 Click here to read his death announcement in Rolling Stone.

John Edmund Andrew Phillips (August 30, 1935 – March 18, 2001) was an American singer, guitarist, songwriter and promoter, most notably of the 1967 Monterey Pop Festival, a landmark event of the counterculture era and the Summer of Love. Known as Papa John, Phillips was a member and leader of the vocal group The Mamas & the Papas.
Living with his fourth wife, Farnaz, in Palm Springs, California, Phillips died on March 18, 2001, at the age of 65. He died in Los Angeles of heart failure just days after completing recording sessions for a new album. Phillips 66 was released posthumously in August 2001. He is interred at Forest Lawn Cemetery (Cathedral City) near Palm Springs.

Song-ography is hosted by You'll Shoot Your Eye Out, a fantastic photographer and funny lady.
Posted by Jackie McGuinness at 5:00 PM