186. This fine figure of a woman is either ‘Boadecea or Mother England’ or possibly Britannia. You can choose; or go with armour, helmets, shields, fancy dress, pantomime, theatricals, warlike women or big sticks.

I am going with fancy dress, theatricals and pantomime  for this week.

My parents often got dressed up and went to dances in Dublin in the early 1950s.
This photo is stamped on the back with Beegan's of Lower Abbey Street. 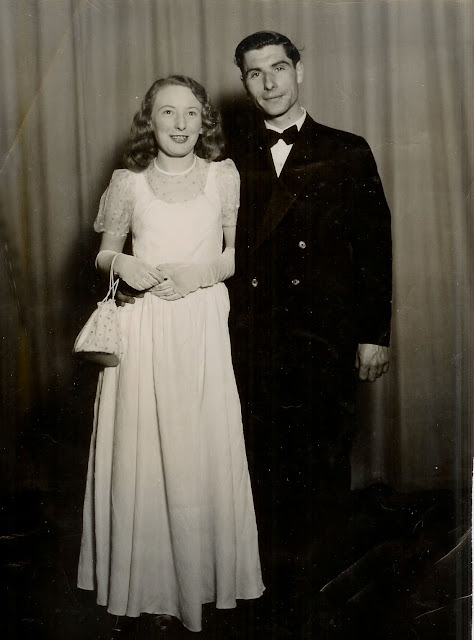 At the Dublin Archives I found a document within the Irish Theatre section I found a reference to a photo taken by the same photographer.

The actor Vernon Hayden was a stalwart of Irish theatre from 1930’s until his death in 1990. Born c. 1914, in his early career Hayden toured with companies such as W.L Dobell, Richard Carrickford, and the famous pantomime company of Jim Johnson. In 1940, he joined O’D Productions, the company founded by Ireland’s most famous music hall performer Jimmy O’Dea and his writing partner Harry O’Donovan. For almost fifty years, Hayden played at the Gaiety theatre, in pantomimes and revues, frequently as the pantomime villain, which earned him the nickname of “the best baddie in the business”. He also worked as stage manager for O’D Productions on tours of Ireland, the UK, and most notably to Australia and New Zealand in 1961. His papers include correspondence, scripts, photographs, handbills, posters, production notes and theatre programs, and also relate to careers of other Irish actors such as Jimmy O’Dea, Maureen Potter and Milo O’Shea.

Vernon Hayden was born c. 1914 into a large theatrical family, which for years was located in Donaghmore, county Tyrone, Northern Ireland. His father was Will Hayden, and his mother had the stage name of Kitty Leroy and was over six feet in height. Both his parents were theatricals and troupers all their lives. They ran a touring company, which travelled Britain and Ireland playing repertory and variety.