Thyme for Tea is hosting "Paris in July"

This photo of the Pont Alexandre III was taken on April 28, the day we arrived in Paris.

Some of the incredible art work on the Pont Alexandre III, taken from a bateaux-mouches, river boat, a few days later.

The Pont Alexandre III is a deck arch bridge that spans the Seine. It connects the Champs-Élysées quarter with those of the Invalides and Eiffel Tower. The bridge is widely regarded as the most ornate, extravagant bridge in the city. It is classified as a French Monument historique since 1975.

The Nymph reliefs are at the centres of the arches over the Seine, memorials to the Franco-Russian Alliance. The Nymphs of the Seine has a relief of the arms of Paris, and faces the Nymphs of the Neva with the arms of Imperial Russia. They are both are executed in hammered copper over forms by Georges Récipon. 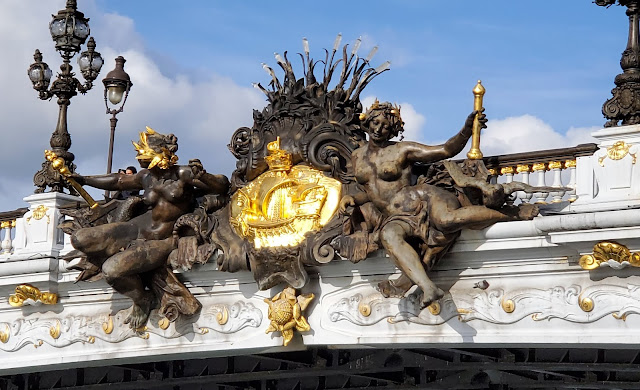 In the same political spirit, the Trinity Bridge in Saint Petersburg was conceived as a memorial to the Franco-Russian Alliance. It was designed by Gustave Eiffel, and the first stone was laid in August 1897 by French president Félix Faure.
Posted by Jackie McGuinness at 12:30 AM