20 minute drive to condo next door to the Princess – home of the Phoenix Open.

Went to Carlos O’Brien’s while waiting for the room and then did groceries at Safeway.

Went to Rawhide – a western village. Very nice set-up with shops and lots for little kids to do – train, hayride, burro rides. Shoot-outs in the street. Fireworks. Large restaurant serving rattlesnake and buffalo. We had ribs.

Sunday – Temp is 95 degrees. Worked out and then lay by the pool. Drove to Carefree (founded by Dick Van Dyke, Johnnie Carson lives there) and saw Boulders golf course, private and beautiful grounds. Huge boulders and mountain homes built into them in the same colour as the rocks.

Drove around Camelback Rd. and the mountain does look like a camel’s back. Went into the Phoenician Resort – very opulent.

Went into the Princess and had onion rings and beer at The Grill.

Went to Scottsdale Old Town for dinner. Everything was closed, but will go back as there were lots of shops. Ate at TGIF.

Drove to “In Celebration of Golf” had absolutely everything with a golf theme. Then to Pro Golf on Shea. Then to Nevada Bob’s and bought a straw hat! Then we went and hit golf balls at Crackerjax.

Teddy Bear cactus are the most dangerous, need pliers to remove the needles.

Lunch at Navajo Reservation in Cameron. Had Navajo stew and John had the Navaho Taco-excellent. 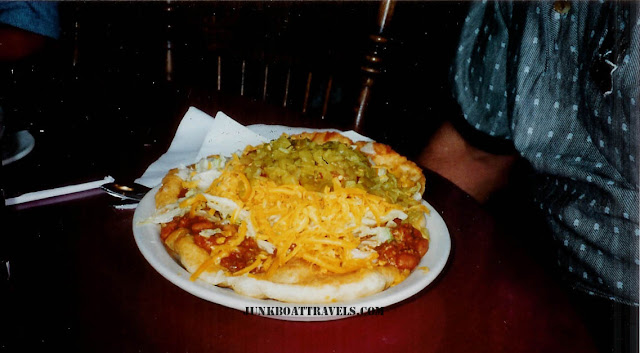 Near Federal prison on highway – Do not stop for Hitchhikers

Wednesday – visited Marriott Camelback Inn and the Biltmore which was built in 1929 and reflects the glamorous style of that time.

Drove into downtown Phoenix,, which was very quiet considering it was a week day. Beautiful church St. Mary’s and many sports stadiums. Had a beer and great potato skins at Seamus Mc Caffrey’s.

Thursday – Breakfast at Cracker Barrel and then drove to Tombstone along scenic highway 83 and 82. Stopped for gas in Sonoita, which is 4,920 feet above sea level. 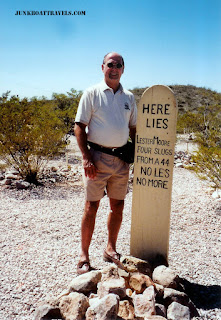 Drove on the “Old Tucson” movie set then back to Scottsdale and had dinner at Pinnacle Peak Park. 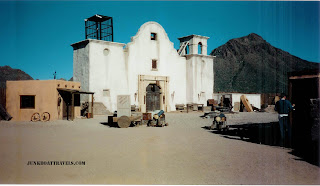 Friday – John golfed at Kierland Mesquite Ironhead. Then just did some down time at the pool.

Went into Scottsdale “Old Town” for dinner at the Lone Star. Most shops were closed.

Left Saturday at 11:00 to head to Palm Springs which is 782 miles. Had breakfast at the Hearty Hen (Mercer and Scottsdale), which was fantastic.
Posted by Jackie McGuinness at 3:31 AM