Week of January 18 in review 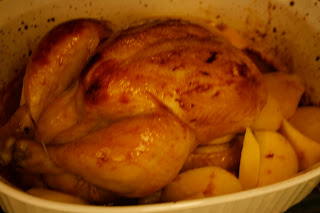 On Sunday I made a roast chicken from this recipe at la recette du jour blog:
http://www.larecettedujour.org/2009/12/roast-chicken-with-turnips.php 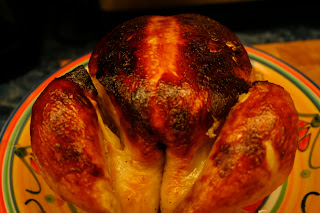 It was very good and I would use it again. The turnips were delicious in the sweet orange sauce. I roasted potatoes in another pan as I wasn't sure if they would be good in the orange sauce. Not in the recipe, but I added an onion to the inside of the chicken as I usually do. He turned out to be a perfect looking chicken as well.
Monday the chicken made it into the soup pot and simmered there.

We had ham with Brussel sprouts on Monday. The remaining ham became quiche on Wedesday and leftovers on Thursday. I normally use broccoli in my quiche (made with Bisquik so no need to make pastry). Instead I wanted to use the spinach we had in the fridge and we both declared it superior to the broccoli.


I had made spagetti sauce on Sunday with a new recipe which called for whole Italian tomatoes. BH picked a can up. It was the worse, most bland sauce I have ever made. I am going back to my old stand by recipe. 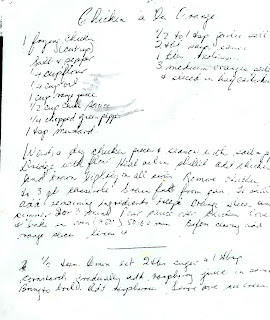 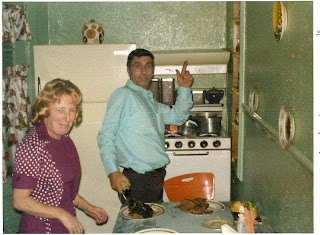 Today will be Chciken a la Orange, a truely old family recipe used by all of us since the 70s. Damn, forgot a picture again! The recipe calls for a whole chicken which you then cut up. This is too much work and then you end up with some really boney pieces. I decided to us chicken thighs (had asked BH to buy for something else and he had got a huge pack for $10). I took half of the pack 5 pieces for this meal. I haven't really used chicken thighs in the past and they worked perfectly in this recipe. We don't have chili sauce in the house so I always use ketchup and add Seiracha Hot Chili sauce which you can buy most places. Here is the original recipe, handwritten by me in the 70s, photocopied in the 80s, scanned in 2005.

Posted by Jackie McGuinness at 12:09 PM