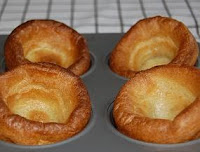 I did have good intentions of posting daily but work got in the way. I hate that!
Last Sunday did prime rib, roast potatoes, carrots, with homemade gravy (is there any other?) and yorkshire pudding. I did take a picture of the roast before cooking but forgot to take a photo of the finished product. I'll get better at this.
The leftover beef became Monday's dinner cut up with rice, sauce. onions and green peppers. Was ok but the sauce could have been tastier. Will have to find some Chinese recipes.
The rest became lunch.
Tuesday was chips and eggs. such comfort food! Wednesday was pasta with pancetta, but the pancetta smelled so strange to both of us when it was cooking that we decided not to take a chance and threw it out. I must confess I ate bits of it when cleaning up and it tasted fine!
Thursday was lazy as BH was going to be late so we had the remaining tourtiere with homemade gravy and beans.
Tonight we'll order in.
Posted by Jackie McGuinness at 1:05 PM