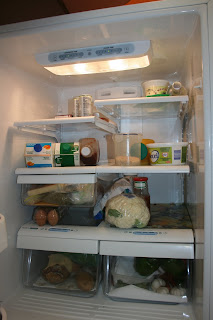 I cleaned out the fridge this morning. More stuff thrown out, must make a better effort to use up rather than tossing.

Soup is on the stove, chicken stock from last weekend's chicken with celery and rice. It's just a small pot, was a small chicken!


This is the same recipe I used a few weeks ago from the blog above. I will use less sugar however, and have since bought a pastry blender. There is still a portion of pumpkin bread left so I will freeze the scones when they are made. This works really well and we just grab one out the night before for work the following day. 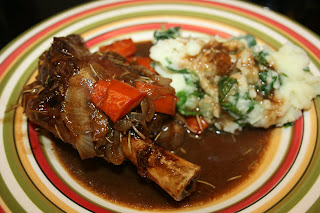 FINAL PRODUCT
Then it's on to Lamb Shanks with Guinness and garlic mashed clocannon (to use the spinach in the fridge). Colcannon is an Irish dish of mashed potatoes, chopped onions and spinach (or kale). I first tried the lamb shank recipe from the LCBO Food and Drink magazine in 2006 and it has become a staple in the winter. I don't bother with the parchment presentation, too much trouble. And the orange is optional depending if there is one in the house. You can, if you have to, substitute a dark beer for the Guinness. I will save the bones in my lamb stock baggie in the freezer for future lamb stock making. 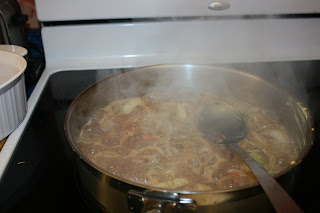 Pat the lamb shanks dry and season with salt and pepper. Heat the oil in a large frying pan over medium-high heat and brown the lamb shanks on all sides. Transfer shanks to a plate. Add onions to the pan, stirring well to coat in the fat, then cover and cook for 10 minutes, or until soft, stirring 2 or 3 times while scraping the bottom of the pan each time.

Add the carrots, celery and rosemary; cook uncovered for 2 to 3 minutes, scraping the bottom of the pan from time to time. Pour in the beer and bring to a boil, deglazing the pan by scraping up the browned bits from the bottom. Add the sugar, mustard and garlic and continue to boil, stirring from time to time, for 10 minutes, or until the beer becomes thick and syrupy.

Meanwhile, remove 4 large strips of zest from the orange with a vegetable peeler and squeeze 1/4 cup (50 mL) juice from the orange. Add the zest and juice to the pan. Continue to cook until the liquid just glazes the onions. Remove from the heat and let it cool. You will have 3 to 4 cups (750 mL to 1 L) onion mixture.

Stand the packages in a Dutch oven or baking dish and bake for 3 hours. 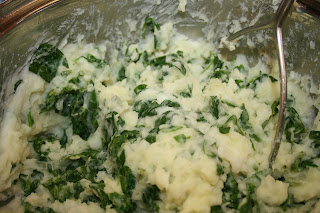 Remove from the oven and place the packages on warmed plates. Cut the strings but allow each diner to open his or her own package.
Posted by Jackie McGuinness at 4:04 PM