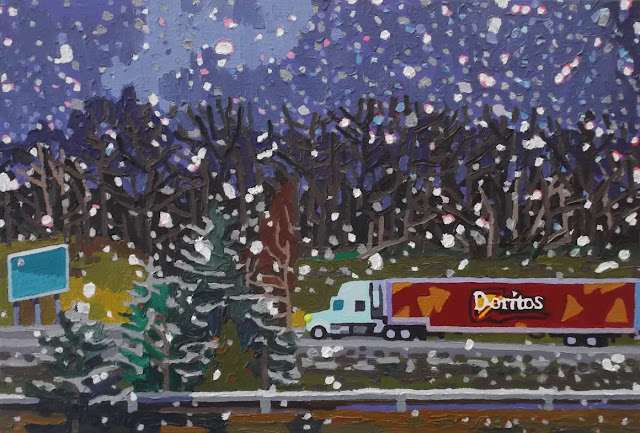 Looks like he will also be a repeat feature!
Jack Bishop is originally from Quispamsis, NB and received a BFA from NSCAD in 2007. He now lives and works in Halifax.
"My paintings are dense representations of Canadian -culture, consumerism, and urban sprawl. They revisit Canadian landscape tradition in terms not of natural but rather of commercial space, where ubiquitous retail outlets dictate use of the land and proclaim its occupation.
For the last 10 years, the subject matter in my paintings has been dominated by commercial imagery and car-culture. I was once told by the late painter Gerald Ferguson to “paint what you know”, and growing up in southern New Brunswick amidst expanding strip malls of Quispamsis and the sprawl of East Saint John, I’ve always identified with travelling the 15 minute highway commute between home and town. In this series of paintings created over the summer, I was riffing off of my romanticism of the Trans-Canada Highway, and experimenting with reflected and refracted colour and light. I became interested in creating backdrops of starry night skies, sunsets, and rainbows amidst mundane segments of ditch, medians and guard rail. I was thinking about capturing a sense of the sublime in nature, and trying to emote an impression of awe and vastness amidst infrastructure of a road carved through the brush." - Jack Bishop

Posted by Jackie McGuinness at 8:53 AM