Cartago was established in 1563 by Juan Vásquez de Coronado, a Spanish governor and conquistador. One of the finest Spanish colonial cities in terms of architecture during its time, much of Cartago was destroyed in 1732 by the eruption of the Irazu Volcano. Sitting at an altitude of nearly 4,800 feet above sea level, the weather in Cartago is much cooler and drier than its neighboring valley towns.


The Basílica de Nuestra Señora de los Ángeles (Our Lady of the Angels Basilica) is a Roman Catholic basilica in Costa Rica, located in the city of Cartago and dedicated to the Virgen de los Pardos, officially known as Virgen de los Ángeles (the Lady of the Angels). The basilica was built in 1639 and was partially destroyed by an earthquake. The basilica has since been restored and constitutes a unique mix of colonial architecture as well as 19th century Byzantine style, the current building dates back to 1939.

The Basilica of Our Lady of the Angels is consecrated to the Virgin of Nuestra Señora de los Ángeles, a small representation of the Virgin Mary carrying the infant Jesus, said to have been discovered by a peasant girl in Cartago. Tradition claims that the little girl found the small statue on a rock and took it home. The next morning she found that the statue was not there but back at the rock, so she took it to the priest and he locked it in a small box. The next morning the statue was back at the rock. During the construction, the church was destroyed by earthquakes so many times, it was finally decided to move it to the location where the statue was found and they were able to finish construction. Many people think that the earthquakes were signs that the Lady of Los Ángeles wanted the basilica built there. 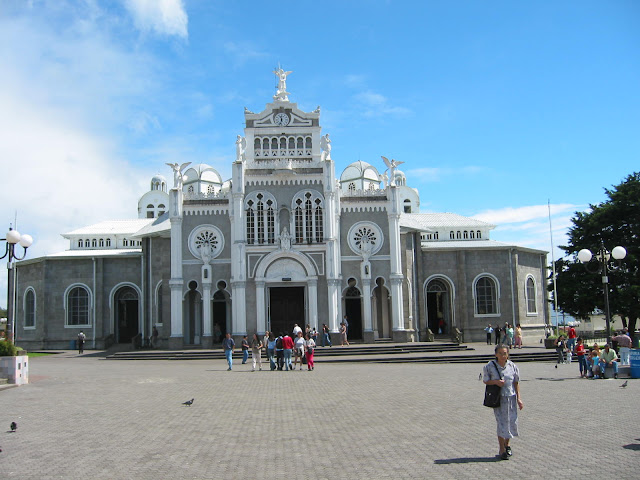