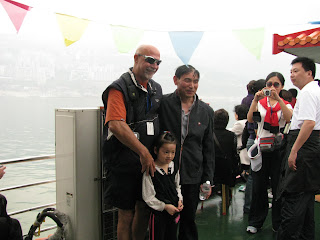 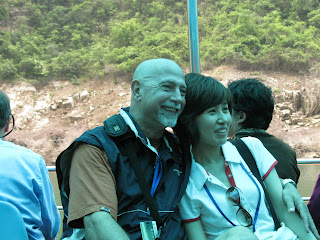 The Chinese insist on having every one of their party’s pictures taken in front of every statue, monument, square, natural attraction etc. I am the opposite, I thrive not to have people in front of my photos.
It started on Day 1 in Beijing. We were at the Forbidden Palace when Alan noticed that people were staring at him and then taking his picture. He is well over 6 feet tall and blond and blue eyed. Maybe that was it. Then women (always women) were shyly taking pictures of Maggie with her blond hair and then tapping her on the arm to ask to get their picture taken with her. I started taking pictures of these people asking for pictures!
On the Great Wall of China, on Day 2 in Beijing, Maggie and I waited for the guys at a top section. There was a Chinese tour group, all sporting their red ball caps, and 2 women stopped to talk to us. They asked where we were from. Ah Canada! Then they asked if we liked Beijing, we figured this out after some initial difficulties. Then what were our jobs, banking, was the easiest answer. Finally they asked if they could get their pictures taken with us.
We took a side excursion to the Shennong Stream while on the Yangtze cruise. On the ferry back to the cruise ship it was John that was the centre of attention. He was sitting across from us and some girls were bashfully watching him. Then they asked if they could sit with him and have photos taken. This went on for a while as more of them got braver and also had their pictures taken. Then the men wanted their pictures taken. John was wearing his silver “Star Trek” sunglasses and a man asked if he could try them on. He then had his picture taken with the glasses. He asked, through our guide, if he could buy them. We tried to explain that John needed them as he was wearing contacts. If we had known they were going to be a big hit we could have brought some extras with us!
We wandered to the front of the ferry and I was stopped by a mother so her little girl could have her picture taken with me. Then she had her daughter stand with John and her grandfather to be snapped as well.
One of the Chinese passengers from Markham near Toronto, was on the ferry. When we were disembarking one of the girls who had initially asked for John’s picture was behind us was beside the Canadian. She asked him to translate that John had a great laugh!
Posted by Jackie McGuinness at 10:35 AM