We are getting very excited about our August trip to Paris.
When we were last there in 1992 we stayed at this hotel for three nights. In 1992 there wasn't any internet to comparison shop hotels. I had gotten a tour book from the library and it was listed under budget hotels. So we made a reservation.
When we checked in the clerk asked how we had heard about the hotel and we explained. We shuld have known something was up when she said "oh, we've renovated since then". When we checked out we almost had a stroke as the cost was $300 a night, an awful lot of money twenty years ago. Hotel prices have remained about the same for a room in Paris.

It is a small quaint hotel in the heart of the city and only has thirteen rooms.

Built in 1480, it has a history of its own!  It belonged to the Duke de Luynes and the Duke d’O and was once the dwelling place of Pierre Seguier, the true Marquis d’O.

In the 1950s and 60s, American poets adopted the site and in the same movement created the "Beat Generation"». Among them were Burroughs, Kerouac, Ginsberg, Corso. 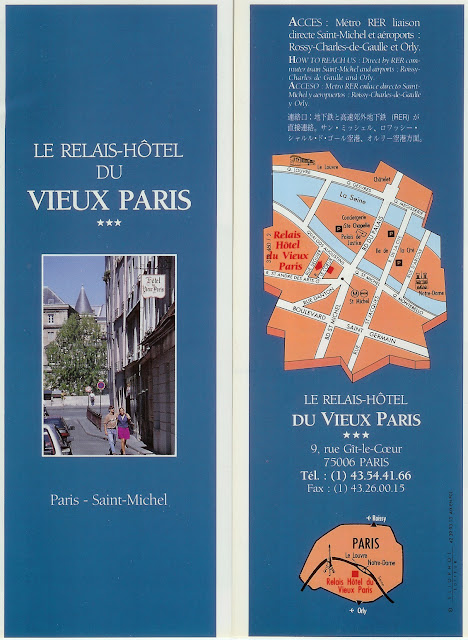 I found this information at a site documenting photos taken at the hotel of famous guests.
From 1956 through 1963, the writers who formed the core group of the Beat Generation lived in a run-down hotel on the Left Bank of Paris. These expats—Allen Ginsberg, Peter Orlovsky, Gregory Corso, Harold Norse, William S. Burroughs, and on occasion, Jack Kerouac—stayed in that small 42-room residence at 9 Gît-le-Cœur, which became known as the Beat Hotel.
Allen Ginsberg's Howl (1956), William S. Burroughs's Naked Lunch (1959) and Jack Kerouac's On the Road (1957) are among the best known examples of Beat literature.
Posted by Jackie McGuinness at 1:30 AM