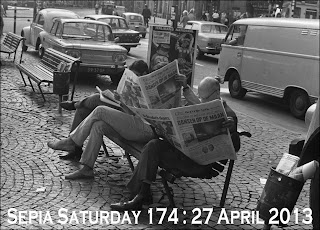 As more and more people get their news from on-line sources, you could be forgiven for thinking that the days of the traditional newspaper are numbered. But go back just a few decades and those over-sized, finger-inking, arm-aching beasts were the way that we all found out what was happening in the world at large. My archive image this week dates from July 1969 and shows a group of avid newspaper readers. It comes from the Flickr Commons photostream of the Netherlands' Nationaal Archief. If you are theme-following this week you might care to go with newspapers or readers or benches; or you might want to focus on the specific event that was causing all that interest 44 years ago (is it really that long ago!). Wherever you choose to go, post your posts on or around Saturday 27 April 2013 and link them to the post.

We sold our house in Baie Comeau and my Mom, my sister, two aunts and a cousin went to England for six weeks. This left my Dad and two uncles in Montreal. We came back to Montreal and rented the ground floor of a duplex. However, Dad had to find a job and it took him to Manitoba with CAE as an electrician. He worked there for a couple of years in the early 1960s.
Dad's pay would be sent to a bank account in Montreal for Mom to manage.

This newspaper article was among the photos and souvenirs that Mom kept. 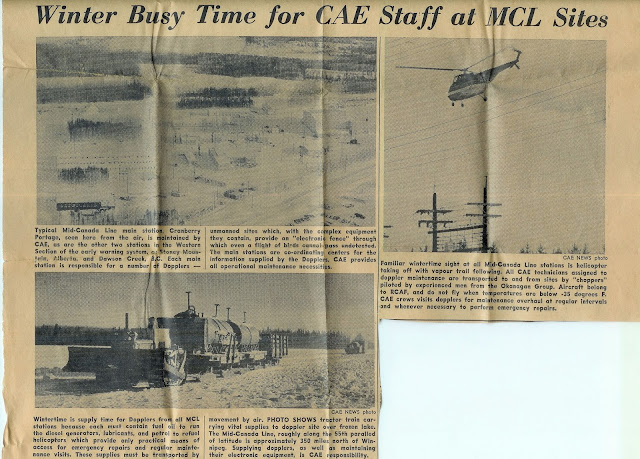 CAE OPENED ITS MONTREAL PLANT IN 1954. SINCE THEN, THE BUILDING HAS EXPANDED 16 TIMES, WITH THE NUMBER OF EMPLOYEES THERE MULTIPLYING FROM 500 TO MORE THAN 3,500. 
On Saint Patrick's Day, 1947, CAE, then known as Canadian Aviation Electronics Ltd., was founded by Mr. Ken Patrick, an ex-Royal Canadian Air Force (RCAF) officer. His goal was to "...create something Canadian and take advantage of a war-trained team that was extremely innovative and very technology-intensive."From the beginning, some of Canada's best known industrialists formed the company's board of directors. In 1951, Mr. R. Fraser Elliot joined the board and became its Chairman two years later.

A new direction
The 1960s began with the award of two milestone contracts. The first was a military contract from the Canadian government for six F-104 Starfighter simulators. The F-104 program was the company's first experience with radar land mass simulation and the incorporation of a visual system, a motion system and a compact mission recorder. Within a five year span 26 additional units had be purchased by five other North Atlantic Treaty Organization (NATO) countries.

For the first year CAE Industries Ltd. operated out of the St-Laurent plant. In 1964 it's offices were transferred to the Place Ville-Marie complex in Montreal's city core. In 1976, it moved once again to its present location in The Royal Bank Building in downtown Toronto.

This website has some fascinating information about the history of MCL.

Sandwiched between the DEW Line and the Pinetree Line, the Mid Canada Line (MCL), also known as the McGill Fence was a series of military sites designed to function as the second line of detection. Its purpose was to detect enemy aircraft that had penetrated south of the DEW Line into the heart of North America. This system operated on the "Doppler" principle. Conceived during the "Cold War" in 1951 it wasn't until January of 1958 that the line became fully operational. The MCL sites were strategically located along the 55th parallel from the Alaska border to the Atlantic Ocean. At its peak, it consisted of 8 Sector Control Stations and approximately 90 unmanned sites about 30 miles apart. With the 1960's came improvements in technology and jet aircraft design in particular which rendered the MCL no longer economically feasible or strategically required, so it was shut down. The western sites were decommissioned in January 1964 and the eastern sites in April 1965.

The following extract is taken from the book "A History of the Air Defence of Canada 1948 - 1997" by the NBC Group
RCAF Cranberry Portage (Sector Control Station 700) was located on Athapapuskow Lake, one quarter mile form the village of the same name and roughly 36 miles southeast of Flin Flon MB. By April 1957, it was up to full strength. As with other sites, it was limited in the service it could provide; in this case, detection only. Cranberry Portage was operational in the beginning of the following year and supported by RCAF Station Winnipeg. As with the other Sector control Stations on the line, it was responsible for the maintenance of a number of Doppler sites that branched out in each direction. RCAF Station Cranberry Portage closed in January 1964.

Posted by Jackie McGuinness at 11:01 AM