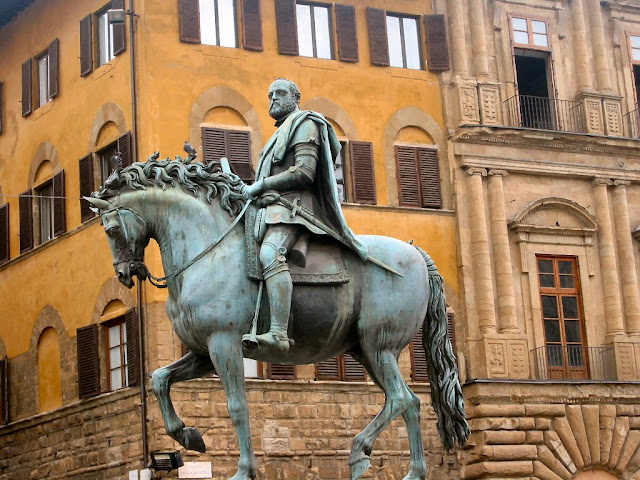 
The equestrian statue of Cosimo I de' Medici, cast in bronze by Giambologna on a commission from Francesco I, dominates the northern part of the Palazzo Vecchio square. The work was ordered in 1587 and a foundry had to be especially created to cast it. The horse was ready in in 1591, cast in a single piece by the experienced armourers of the Duke, while the figure of Cosimo and the pedestal with three bas-reliefs illustrating the most important periods in his life, were completed in 1594: when he was elected duke (1537), his conquest of Siena (1555) and when he was granted the title of Grand Duke (1569).

The statue immediately became so famous that apparently the same mould was also used to cast the horse for the similar monument to Henry IV of Bourbon, commissioned by his widow, Queen Maria de' Medici.
Source:
www.mega.it/eng/egui/monu/sstatue.htm
Posted by Jackie McGuinness at 7:00 PM