I love Ruth Rendell and I love psychological thrillers. Getting inside psychotic heads fascinates me and as always Ruth never disappoints me.

Guy, the protagonist, is crazy, to say the least. He just can't get over his teenage infatuation with Leonora and she is terrified of him. he lives in a fantasy world where everyone is against him but his "love can conquer all".

In Together Tea, Marjan Kamali’s delightful and heartwarming debut novel, Darya has discovered the perfect gift for her daughter’s twenty-fifth birthday: an ideal husband. Mina, however, is fed up with her mother’s years of endless matchmaking and the spreadsheets grading available Iranian-American bachelors. Having spent her childhood in Tehran and the rest of her life in New York City, Mina has experienced cultural clashes firsthand, but she’s learning that the greatest clashes sometimes happen at home.After a last ill-fated attempt at matchmaking, mother and daughter embark on a return journey to Iran. Immersed once again in Persian culture, the two women gradually begin to understand each other. But when Mina falls for a young man who never appeared on her mother’s matchmaking radar, will Mina and Darya’s new-found appreciation for each other survive?

I had an Iranian girl, also named Marjan, who worked for me and this book perfectly reflects what what she told me about life in Tehran before and after the revolution. It is a fascinating read and makes you realize why people needed to escape to other countries even though it is heart-breaking to leave your home. 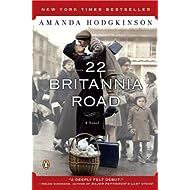 With World War II finally over, Silvana and her seven-year-old son, Aurek, board the ship that will take them to England, where Silvana's husband, Janusz—determined to forget his ghosts—has rented a little house at 22 Britannia Road. But after years spent hiding in the forests of Poland, Aurek is wild, almost feral. And for Silvana, who cannot escape the painful memory of a shattering wartime act, forgetting is not a possibility.

Posted by Jackie McGuinness at 12:57 PM