Today is Monday, my first official Monday that I don't have to get up and go out. It is also the first day that there aren't any painters in the house.
And it was a great one for it as we had thunder and lightening from around 7am until it would have been time for me to leave.
Slept in a little later and then poked around.
We still have lots to do to get house back to normal after all that painting last week. I started organizing and cleaning the pictures and what not and at least getting them into the right rooms for hanging.
DH put the stand back up in the hall but quickly announced that the colour was all wrong and we both said black simultaneously.


We had already stated that the tables in the TV room would need to be repainted black. So DH went off to get some paint brushes and took the items out the back to be painted. The paint that was leftover from the staircase was used.


BEFORE - will post AFTER tomorrow if I get a chance 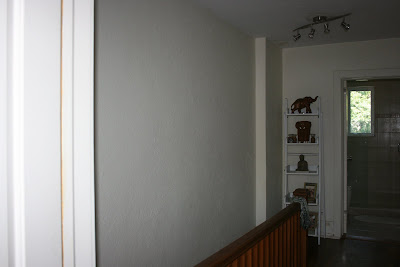 I headed out downtown to get my hair cut and pick up some cleaning stuff at the Dollar store which is always a satisfactory shopping experience despite the very weird people who frequent it.
I've decided not to track my savings daily as it seems to be pretty standard coffee, and sometimes breakfast and/or lunch. The subway tokens will be saved some days but most days I will likely go out somewhere.
Posted by Jackie McGuinness at 4:45 PM

Email ThisBlogThis!Share to TwitterShare to FacebookShare to Pinterest
Labels: house