St. Thomas ON is famous for the death of Jumbo the Elephant.

Jumbo (about December 25, 1860 – September 15, 1885), also known as Jumbo the Elephant and Jumbo the Circus Elephant, was a 19th-century male African bush elephant born in Sudan. Jumbo was exported to Jardin des Plantes, a zoo in Paris, and then transferred in 1865 to London Zoo in England. Despite public protest, Jumbo was sold to P. T. Barnum, who took him to the United States for exhibition in March 1882.

The giant elephant's name spawned the common word "jumbo," meaning large in size. Examples of his lexical impact are phrases like "jumbo jet", "jumbo shrimp," "jumbo marshmallows," and "jumbotron." Jumbo's shoulder height has been estimated to have been 3.23 metres (10 ft 7 in) at the time of his death, and was claimed to be about 4 m (13 ft 1 in) by Barnum. 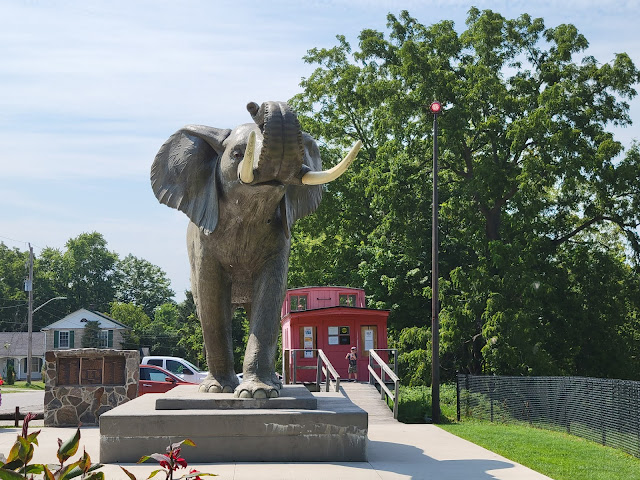 Jumbo died at a railway classification yard in St. Thomas, Ontario, on September 15, 1885. In those days the circus crisscrossed North America by train. St. Thomas was the perfect location for a circus because many rail lines converged there. Jumbo and the other animals had finished their performances that night, and as they were being led to their box car, a train came down the track. Jumbo was hit and mortally wounded, dying within minutes.

Barnum told the story that Tom Thumb, a young circus elephant, was walking on the railroad tracks and Jumbo was attempting to lead him to safety. Barnum claimed that the locomotive hit and killed Tom Thumb before it derailed and hit Jumbo, and other witnesses supported Barnum's account. According to newspapers, the freight train hit Jumbo directly, killing him, while Tom Thumb suffered a broken leg.

Many metallic objects were found in the elephant's stomach, including English pennies, keys, rivets, and a police whistle.

Ever the showman, Barnum had portions of his star attraction separated, to have multiple sites attracting curious spectators. After touring with Barnum's circus, the skeleton was donated to the American Museum of Natural History in New York City, where it remains. The elephant's heart was sold to Cornell University. Jumbo's hide was stuffed by William J. Critchley and Carl Akeley, both of Ward's Natural Science, who stretched it during the mounting process; the mounted specimen traveled with Barnum's circus for two years.

Posted by Jackie McGuinness at 3:27 PM