There is a condo building going up on this block, it is next to my office. It will also be the new home of the Toronto Film Festival. Before construction could start the History Channel came to the site and did some digging. 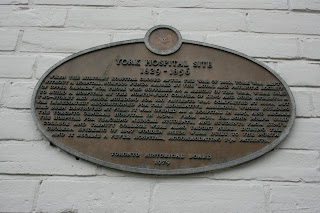 In 1842 this block, housed a hospital for Irish immigrents fleeing the potato famine.it also contained an Emigrant Building. The Irish, fleeing from the potato famine and other misfortunes, were not warmly welcomed in Toronto. The ships that brought them to Canada had appalling conditions and most arrived very unhealthy. They carried cholera and other diseases. To cope with this and the want of proper sanitation, the city passed sanitary regulation in June 1847. Quarantine sheds. The first in the city, were established at the north-west corner of King and John for cholera. Other sheds set up near Bathurst for typhus. As the health problems and numbers of immigrants kept growing, other sheds were built. Some were housed in shanties, boarding houses and even hotels. In the late 1850s, German, Scandinavian and other immigrants arriving by boat generally went on by train to other places. About half the Irish stayed, to poor to proceed farther, but others continued on to the United States. While the Irish suffered terribly from cholera, not all cholera epidemics can be blamed on the Irish. The real lack of proper sanitation systems in the city was a major factor in the spread of cholera and other plagues.
This picture was taken in 2007. this week when I am in the office I will take a picture of what the spot looks like now. 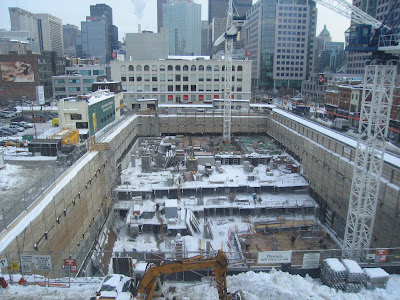 Posted by Jackie McGuinness at 2:09 AM