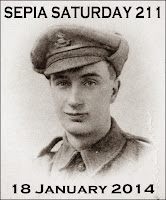 2014 is, of course, the centenary of the start of that conflict known as The Great War or the First World War. Although the age of photography captured previous major conflicts, the Great War stands out for both its devastating scale and the fact that by 1914 photography was in the hands of the people rather than the experts. So many of us have photographs of family members who were caught up in the conflict, poignant reminders of the scale of loss and sacrifice. Our theme image this week features the face of Private Morton Neill of 9 Battalion, King's Liverpool Regiment, who was reported missing, aged 19, on 30 July 1916 during the Battle of the Somme. He was just an ordinary soldier, commemorated now in the Faces Project of the Imperial War Museum which is available on Flickr Commons. Thus Sepia Saturday 211 provides us with a chance to remember loss in any of its manifestations. Just post your post on or around Saturday 18 January 2014 and then link your post to the list below.

This is always a tough challenge as I was born in Ireland as were all my ancestors and we don't have any photos of anyone in uniform or taking part in a war. I'm not saying they didn't as my father always talked about his father taking part in the Easter Uprising in 1916 but my grandfather's age would not have been right unless he took part at 14. Thomas was my grandfather. Perhaps he meant my great-grandfather who was 45 in 1916?

Instead I googled Mc Guinness as part of the Easter Uprising.

I found a Joe Mc Guinness - no relation that I know of.

The political ramifications of the Rising and its suppression were soon revealed in subsequent elections. The first of these occurred on 17 February 1917 in North Roscommon, when Count Plunkett, the father of the executed Joseph Plunkett was elected as an independent who would abstain from attending Westminster. Having backed Plunkett’s campaign, Michael Collins proposed Joe McGuinness as a candidate for the South Longford seat when it fell vacant in May. At the time McGuinness was serving a sentence in Lewes gaol for his part in the Rising. Deported prisoners would provide the nucleus of a resurgent, declaredly separatist , Sinn Féin party who in October would consolidate their link with the Irish Volunteers when a former prisoner, Eamon DeValera, assumed the presidency of both organisations. That July, De Valera had won the East-Clare by-election, defeating a Home Rule candidate. 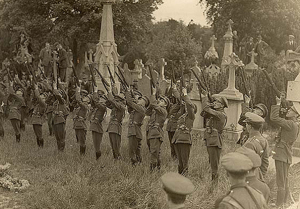