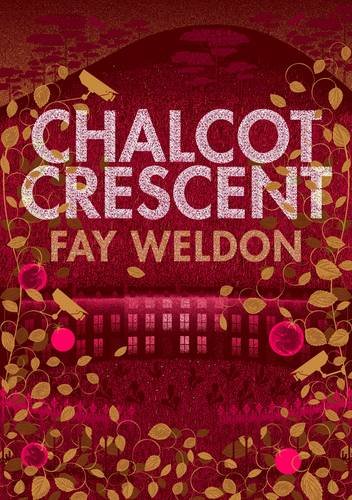 From the book jacket:
Fay Weldon in top gear: a wickedly sharp, history-bending, cosmos-colliding novel that tells the story of Frances, Fay's never-born younger sister. Its 2013 and eighty-year-old Frances (part-time copywriter, has-been writer, one-time national treasure) is sitting on the stairs of Number 3, Chalcot Crescent, Primrose Hill, listening to the debt collectors pounding on her front door. From this house she's witnessed five decades of world history - the fall of communism, the death of capitalism - and now, with the bailiffs, world history has finally reached her doorstep. While she waits for the bailiffs to give up and leave, Frances writes (not that she has an agent any more, or that her books are still published, or even that there are any publishers left). She writes about the boyfriends she borrowed and the husband she stole from Fay, about her daughters and their children. She writes about the Shock, the Crunch, the Squeeze, the Recovery, the Fall, the Crisis and the Bite, about NUG the National Unity Government, about ration books, powercuts, National Meat Loaf (suitable for vegetarians) and the new Neighbourhood Watch. She writes about family secrets...The problem is that fact and fiction are blurring in Frances' mind. Is it her writer's imagination, or is it just old age, or plain paranoia? Are her grandchildren really plotting a terrorist coup upstairs? Are faceless assassins trying to kill her younger daughter? Should she worry that her son in law is an incipient megalomaniac being groomed for NUG's highest office? What on earth can NUG have against vegetarians? And just what makes National Meat Loaf so tasty?


Frankly this book terrified made me as it talked about the state of the world's economies in the not so far future - the book is set in 2013. It was further brought to light as I saw David Chilton, The Wealthy Barber being interviewed this morning.
He speaks about consumerism and in the book consumerism has disappeared because no one has any money to buy anything. You can't sell anything you own because no one wants it. The following is from his interview:

"Q: Let’s talk about over spending – the tone of your book suggests you think people are too materialistic and self-indulgent. Is that fair to say?
A: Yes. Absolutely. It’s almost impossible to communicate to the public just how crazy some people’s spending is. I give a specific example in the book about a $500 hockey stick. I’ve seen families that are making no RESP contributions, but are buying multiple $500 hockey sticks in a year."


In the book Fay Weldon writes about consumerism:
"Consumerism just went out of fashion one day, like the hula hoop - one day everywhere, the next nowhere, for no apparent reason, and after that there was no going back."


Further currents affairs spoke to the issues in this book, such as the the crisis taking place in Athens.
Fay Weldon writes:
"Feels like 2010 all over again. That was the year Europe began to fall apart, and the idea of the nation state to assert itself - not that it had ever really gone away." 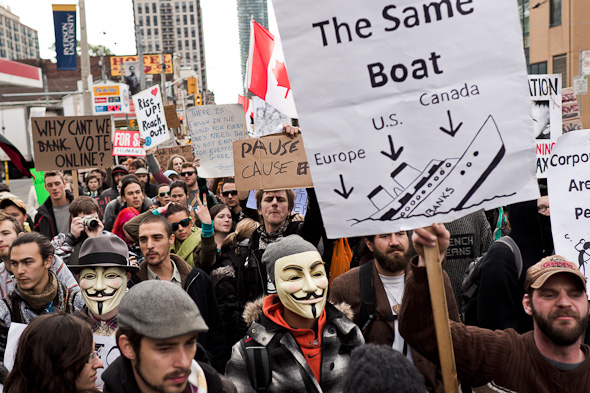 Source - and even closer to home is Occupy Toronto taking place right now.

The NUG - the national government controls everything from food distribution  to jobs to who gets regular power supply (and therefore control the recharging of mobile phones and everything else). everything is public, nothing is private.


By then “it has become apparent,” reads the Guardian’s review, “that recession is not a temporary departure from the norm but an awakening from a happy but foolish dream of prosperity into a grim and enduring reality: this is how it is and it will go on like this, only worse.”


So enough with the gloomy, the book is good, the main character Frances is witty and a very spry 80 year old.  "I am not cynical. I am just old. I know what is going to happen next," says Frances.
At one point Frances invites you to put the book down, give up and do something else. but I needed to go on.

However as I continued to read I found she was repeating phrases from earlier in the book. I wondered if this was meant to t reflect her age and memory lapses or whether it is just a padding technique. Since Frances seems to be a very lucid 80 year old I wasn't sure what to make of these repetitions.


All the dysfunctional, blended family characters made me laugh, but at times felt very unrealistic as the book went on. It began to drag a little but I had to find out what happened.
It does pick up in the last quarter as it all comes together with some strange twists.


I also loved her comments on men.
"Men almost never leave a wife for an empty bed."
"Edgar would have made a good job of badmouthing me to her, as men so often do of the women who were once in their lives. That is, if they remember them at all."
"It is never sensible to put too much trust in men's continued capacity to look after you. They get swept up in some sexual or religious or radical fever and put you aside as trivial. And once out of your lives they forget about you altogether; their life with you is wiped from memory. You remember, they do not."


On children:
One's children are always remembering things one could swear they never said." 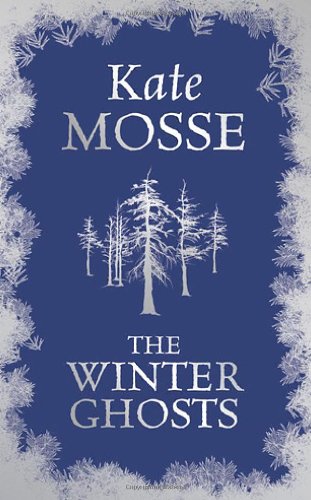 From the book jacket:
The Great War took much more than lives. It robbed a generation of friends, lovers and futures. In Freddie Watson's case, it took his beloved brother and, at times, his peace of mind. In the winter of 1928, still seeking resolution, Freddie is travelling through the French Pyrenees. During a snowstorm, his car spins off the mountain road. He stumbles through woods, emerging in a tiny village. There he meets Fabrissa, a beautiful woman also mourning a lost generation. Over the course of one night, Fabrissa and Freddie share their stories. By the time dawn breaks, he will have stumbled across a tragic mystery that goes back through the centuries.


I am finding this a slow read mainly because Freddie is annoying me!!


Plan to start this week:

This is the second book in her series. I read the first, The Ice Princess, a few weeks ago and really enjoyed..
From the book jacket:
During an unusually hot July, detective Patrik Hedstrom and Erica Falck are enjoying a rare week at home together, nervous and excited about the imminent birth of their first baby. Across town, however, a six-year-old boy makes a gruesome discovery that will ravage their little tourist community and catapult Patrik into the center of a terrifying murder case.
The boy has stumbled upon the brutally murdered body of a young woman, and Patrik is immediately called to lead the investigation. Things get even worse when his team uncovers, buried beneath the victim, the skeletons of two campers whose disappearance had baffled police for decades. The three victims’ injuries seem to be the work of the same killer, but that is impossible: the main suspect in the original kidnappings committed suicide twenty-four years ago.
When yet another young girl disappears and panic begins to spread, Patrik leads a desperate manhunt to track down a ruthless serial killer before he strikes again.
Posted by Jackie McGuinness at 9:01 AM

Email ThisBlogThis!Share to TwitterShare to FacebookShare to Pinterest
Labels: books, It's Monday What Are You Reading?
Location: Toronto, ON, Canada