Toronto ON
Click here for a history of Toronto lane naming and a list of other lanes. That post is a work in progress, and gets updated frequently.
Little Italy

Gomes’s story begins with her as a teenager in Portugal where she rode a horse to get to work. After immigrating to Canada she was one of the founders of the first Portuguese school in North America and was always helping others. “New arrivals from Portugal were sure to seek her assistance in order to establish themselves by finding a job, schools for their children and everything else a newcomer would need. Her home would be many people’s first home. She fed and clothed when she could”. 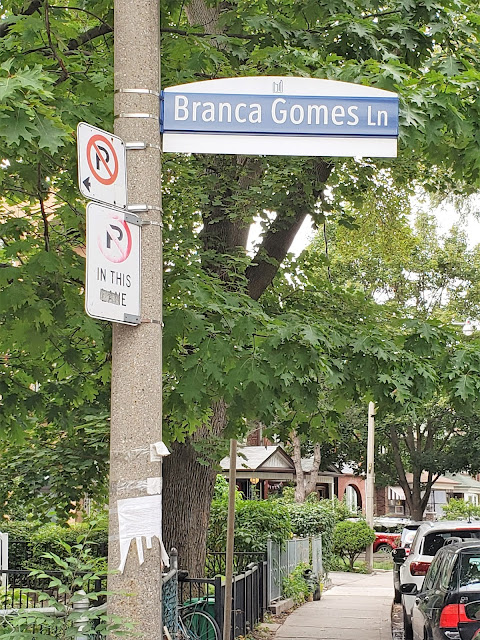 There is also a mural close by that depicts her as the school teacher - you can see her name on the far right. 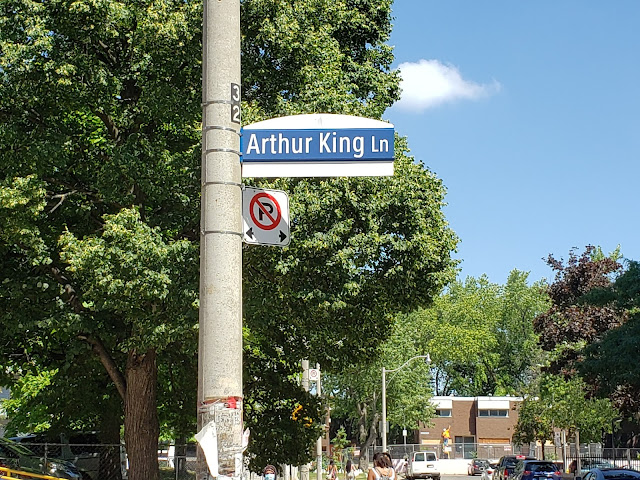 "Arthur Augustus King" February 23, 1927— December 14, 2011 Few fighters have captured the imagination of Toronto’s boxing fans like Arthur King did during the Forties and Fifties. The son of Immigrant parents from Barbados and Panama, he was born in Toronto. As a child, he lived on Augusta Avenue and Brunt Street and also at the Children’s Aide Orphanage downtown after the untimely death of both his father and mother. After being adopted by the Carnegie family, he moved to Boswell Avenue, taking his first job at a toy factory as a 16 year old.
A penchant for settling arguments with his fists, lead King to the Afro Community Church gymnasium, where trainer Jimmy Jones began polishing the youngster's athletic gifts. It was also there that King met the great heavyweight champion Jack Johnson, and adopted the ring name "LiI Arthur", a sobriquet that Johnson had used during his ring career. As a 16-year-old in the fall of 1943, King burst on the Toronto boxing scene, regularly selling out weekly amateur shows at Massey Hall. Fighting against nearby rivals, as well as boxers brought in from as far away as Detroit and Montreal, King established himself as the finest amateur boxer in Canada — though with the Olympics on hold due to the War, he was unable to show his talents on the world stage until turning pro in January of 1946. King’s abilities were enough for promoter Frank Tunney to take the unusual step of having the 18-year- old headline his debut at Maple Leaf Gardens. It would be the first, of over thirty professional main-event appearances at the famous downtown building for King, a record for the venue to date.
Fighting out of Philadelphia between 1946 and 1953, King headlined shows in many of the major American cities, and at one time was ranked as the #1 contender for the World Title held by Ike Williams.
During that time, he returned to Toronto frequently, and beat many of the best lightweight fighters on both sides of the border, though boxing politics stood in his way of a world title shot. King’s trainer, Jimmy Wilson. who trained several world champions, told the Toronto press that he believed King would have been a world champion if the opportunity had been presented. It was a view that King’s peers also held, with fellow lightweight contender Henry Davis telling the Toronto Star that in the opinion of the fighters, King was considered ‘the best of all the lightweights.”
The title chase ended in November of 1953, when King broke his left hand against Eddie Chavez in San Francisco. It was a bad fracture requiring surgery, and King found himself on the sidelines for the next two years.
He moved back to Toronto In 1956 for a comeback, ending his career on a high note the following year with a victory over middleweight contender Yama Bahama. After leaving the ring, King settled down to raise a family of three children with his wife Marie. He worked for many years at the Dominion warehouse. In his spare time; he set up boxing lessons at a local community centre and trained young boys how to box. He felt that this not only kept them off the streets, it also taught them discipline, gave them self-confidence and self-worth, It worked like a champ. The boys loved their coach, and won some of the Ontario competitions.
King was elected to the Canadian Boxing Hall of Fame In 1987.