April 2021 - Toronto ON
Click here for a history of Toronto lane naming and a list of other lanes. That post is a work in progress, and gets updated frequently.
Front St. near St. Lawrence Market 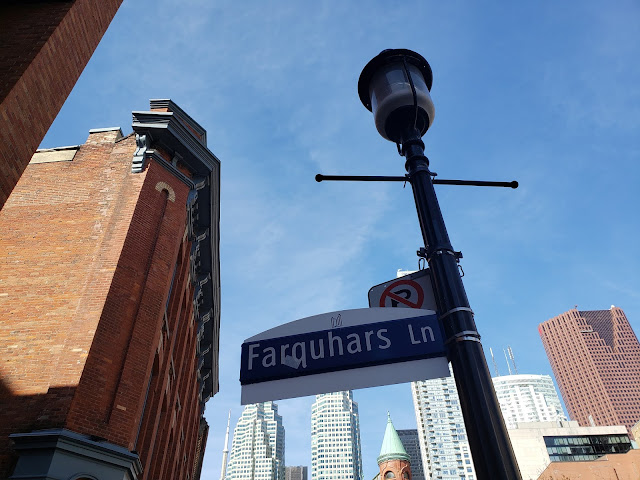 It appears that Farquhars Lane is named not after any individual, but for a Farquhar family, who were builders, pavers, stonecutters and construction workers in the late nineteenth and early twentieth centuries.

James Farquhar (d.1890) was an English-born mason who had been employed by John Worthington at Queenston in the 1850s, and later partnered with a nephew, George Farquhar, to operate stone quarries, lime works, and a building-material and contracting business. James had two sons, Ewart and Charles, who initially worked for him, and then in 1873 established their own contracting firm, E. & C. Farquhar, specializing in street paving.

Toronto-born, elder son, Ewart (1848-1935), withdrew from the firm about 1889, successfully ran in Toronto for alderman in 1891; then returned to the building business as a member of Messrs. Farquhar & Yorke, Cut Stone Contractors & Builders.
Charles, was born in Queenston in 1853. After the dissolution of E. & C. Farquhar, Charles operated his own business, at times employing as many as 300 workers, principally in street paving in Toronto.

In addition to this definite Farquhar family in the construction business, there was also a William Farquhar, who had “a stonecutting business at the foot of Church Street”, as cited by Eric Arthur in his book, “Toronto: No Mean City.” In the 1860s, William operated in partnership with David Ramsay as Ramsay & Farquhar, and his stonework enjoyed considerable prominence, most famously in Toronto in The Golden Lion, a building constructed at 33-43 King Street East for dry-goods merchants, R. Walker & Sons, the largest retail business in Ontario in the late 1860s. The site is now occupied by the King Edward Hotel.
In the 1870s, William operated W. Farquhar & Co., in partnership with Alexander Manning and others, to build the Parliamentary Library in Ottawa.
Whether William was also a member of the above family, I have been unable to determine as yet, but with such personal distinctions, and the proximity to the lane of some of them, I am inclined to believe that it is actually William alone who is the namesake.
Of note - the King Edward Hotel plaque mentions it was built by Gooderham's company. One of Gooderham's buildings is just down the street from Farquhars Lane, it's green domed roof can just be seen in the photo above.
The Gooderham Building, also known as the Flatiron Building, is an historic office building It is located on the eastern edge of the city's Financial District (east of Yonge Street) in the St. Lawrence neighbourhood, wedged between Front Street and Wellington Street where they join up to form a triangular intersection. Completed in 1892, the red-brick edifice was an early example of a prominent flatiron building.

The Gooderham Building is the focal point of one of Toronto's most iconic vistas: looking west down Front Street towards the building's prominent rounded corner, framed on the sides by the heritage commercial blocks along Front Street, and with the skyscrapers of the Financial District towering in the background. The CN Tower is also visible from certain angles behind Brookfield Place. This vista frequently appears in imagery of the city. 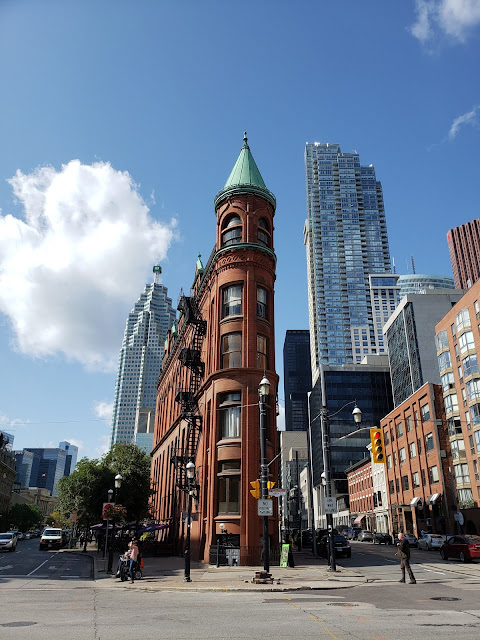 The mural in the plaque below is on the back side of the building. 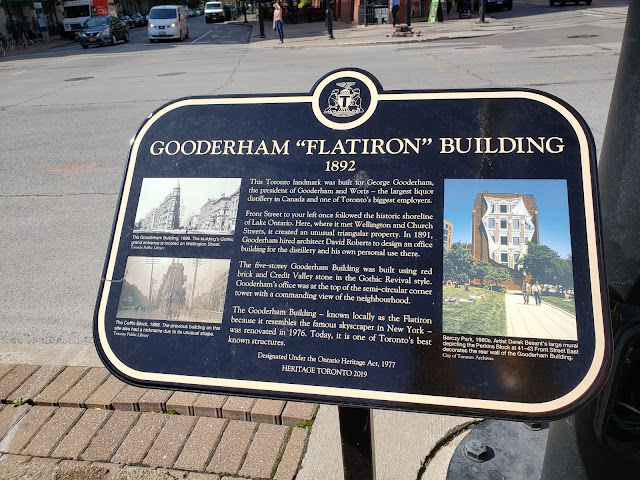