Synopsis here.
The plot centers on a typical Manhattan family relocated recently from upper NY town Ithaca: Richard, a driven, self-important university administrator; his wife, Liz, a stay-at-home mom who has given up her career in support of Richard's; Jake, 15-year-old private school son; and Coco, their precocious adopted Asian six-year-old daughter. Jake is sent an explicit video via e-mail by a 13-year-old girl whom he had just met at a party the night before, and rejected her further advances after he has led her on. This event drives the plot.

This is a fast-paced book. The author  portrays conversations between family members. All her characters are believable, even if I didn't particularly like some of them.
She examines the intricacies of our fast-pace and very connected society. She shows a very believable picture of "helicopter" parents, so busy overparenting their children.
As an aside, I could have easily throttled Coco!! 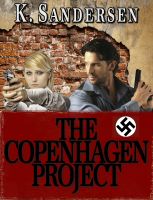 From the book jacket:
Spurred on by a feeling of unease at the circumstances of her estranged father's death, Lone Christensen leaves behind her duties as an academic at Cambridge University to investigate what really happened during his final hours. Lone’s investigations eventually lead her to her roots in Copenhagen, where she must relive the memories of her own difficult childhood life with her father. Aided in her search for the truth by Lucien, a history student studying the Danish resistance movement during World War II, Lone uncovers her father's secret past, and one uncertainty leads to another. Soon the young researcher is up against a string of unexplained deaths, a shadowy detective who seems determined to bury the truth, and her father's deadly enemies - who are determined to ensure that his secrets have died with him, whatever the human cost.


This book made me shudder and it wasn't due to the content. This had to be the worst translation of a  book, full of spelling and grammatical mistakes. The absolute worst one in my mind, and repeated over and over as part of the description of one of the characters which referred to his sunglasses as Ray-Benns!! I even googled this, just in case it really was a brand name, but wasn't surprised when I was right and it meant Ray-Bans.
Lone, the main character was just a plain, impolite, unpolished, rude nasty piece of work that you couldn't like even if you tried.  The only redeeming factor and the only reason I stuck with it was because the story premise was interesting.

From the book jacket:
A novel of startling scope and ambition, Prague depicts an intentionally lost Lost Generation as it follows five American expats who come to Budapest in the early 1990s to seek their fortune. They harbor the vague suspicion that their counterparts in Prague have it better, but still they hope to find adventure, inspiration, a gold rush, or history in the making.

This was a free book offered by Kobo for my e-reader and since it's obvious I'm on a Nazi reading kick I downloaded it. Visiting Nuremberg last month has me hooked on World War II history.

From the book jacket:
In this riveting amalgam of political intrigue, poignant romance, and bare-knuckled action, six friends risk everything to thwart an international Nazi conspiracy.
In the financial devastation of the 1930s, a greedy, power-hungry group of German industrialists plot to usher in the National Socialist Party in order to rearm Germany and reap the financial rewards. Thus rises Hitler.
With Hitler in power, the Six Sentinels, graduates of an elite American doctoral program, uncover the industrialists' plan to hoard hundreds of millions of dollars in illegal war profits. Using their financial and familial connections around the globe, they work to foil the machinations of the financiers of the Third Reich. In a daring strategy of Robin Hood-style thievery, the sentinels put their lives on the line to serve justice - and thus become embroiled in a dangerous and violent international conspiracy.

Posted by Jackie McGuinness at 9:31 AM

Email ThisBlogThis!Share to TwitterShare to FacebookShare to Pinterest
Labels: books, fortunes of war, It's Monday What Are You Reading?, Prague, the copenhagen project, This Beautiful Life